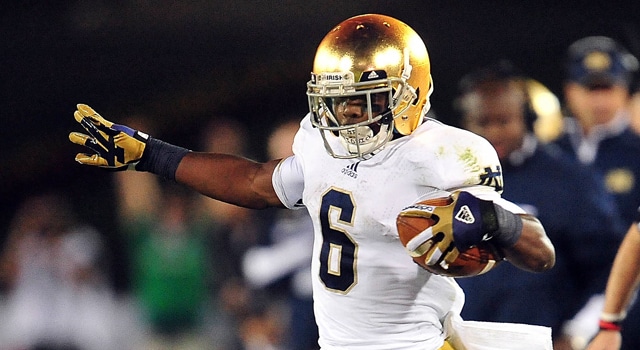 The Irish are going to Miami.  Notre Dame completed its miracle regular season with a 22-13 victory over arch rival USC.  The Irish followed their blueprint for success to perfection versus the Trojans, starting with a bend but don’t break defense to go along with a dominant run game and mistake free football from Everett Golson.  The following players led the way for the Irish in their victory over USC.

One week Cierre Wood shines, the next Theo Riddick takes over.  Riddick ran the ball with conviction against the Trojans, consistently gashing them for big runs and seldom going down to the first tackler.  Riddick rushed for 146 yards and a touchdown and was unstoppable when running at the heart of the USC defense.  Riddick also contributed three receptions for 33 yards, two of the receptions converted key third downs on scoring drives.

With the Irish offense often stalling deep in Trojan territory Kyle Brindza needed to step up, and he did just that.  Brindza was 5/6 on field goals, all of which being critical kicks.  Whenever the Trojans would make it a one possession game Brindza was there to re-establish the nine point lead.  Brindza also drilled a career long 52 yarder to end the first half and put the Irish up six points, a margin that USC would never get closer than.

Matthias Farley was a key part of the defensive gameplan to keep everything in front of the safties and limit big plays.  Farley played very well from his safety spot, limiting the big play potential of Marqise Lee and Robert Woods, causing Max Wittek to have to string long scoring drives together.  Farley led the Irish with nine tackles and along with Zeke Motta had great success pinching down at the goal line and stopping USC’s running backs in the backfield.

The senior leader of Notre Dame’s defensive line stepped up when the Irish needed a pass rush.  Lewis-Moore had five tackles, two of which for loss, 1.5 sacks and a forced fumble.  Even when he wasn’t sacking Wittek, Lewis-Moore was having success collapsing the pocket around him and forcing difficult throws, largely through his use of the bull rush.  Lewis-Moore led the defense in the second half in which their play drastically improved and they recaptured control of the line of scrimmage.