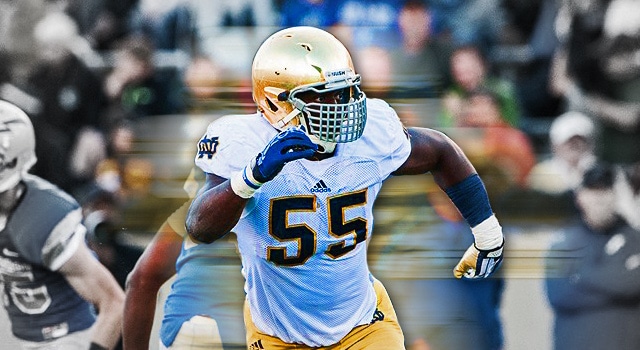 Notre Dame will have a trio of departing seniors looking to improve their NFL resumes on Saturday afternoon Saturday afternoon at the East West Shrine Game in St. Petersburg, Florida.  Prince Shembo, Tommy Rees, and Bennett Jackson will all be playing for the West team.

Here’s a quick look at what each of the three need to do at the Shrine Bowl to pad their resumes before the NFL Scouting Combine next month.

Notre Dame fans can tune in to NFL Network tomorrow at 4:00 PM to cheer on these three Golden Domers one more time.  They will have some cheerleaders among their former teammates as well.

A 4th Notre Dame senior, TJ Jones, was set to play in the game but had to pull out due to injury.  It’s a shame for Jones that he won’t be able to play because he would have likely been the best wide receiver in the game along with Michigan’s Jeremy Gallon.   It will be important for Jones to get healthy in time for the Combine though because he has the ability to put up strong numbers in Indy to improve his stock.

In today’s game, Shembo probably has the best chance to increase his draft stock simply because we’ve seen him just have those games every now and then where he just can’t be blocked – Boston College 2010 and 2012 (5 sacks combined) and Arizona State in 2013 (3 sacks) for example.  Unfortunately for Notre Dame, Shembo was never able to have that type of impact on a week in and week out basis.

The anchors of the left side of Notre Dame’s offensive line for the last three years, Zack Martin and Chris Watt, are set to play in the 2014 Senior Bowl in Mobile, Alabama next Saturday.  Martin has been mentioned as a possible first round pick in many prominent mock drafts while Watt is currently projected as a 2nd-3rd round pick by CBS.