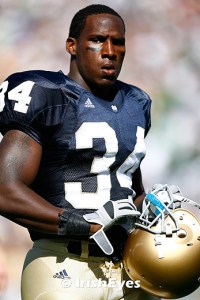 One of the lesser publicized stories to come out of Satuday’s loss to North Carolina was the first career touchdown for junior James Aldridge.  The former 5 star recruit who has had trouble getting back to his high school form after his knee injury his senior year reached the end zone for the first time of his career in the third quarter on Saturday.

Aldridge hasn’t been getting a whole lot of carries this year, but he is making the most out of the ones he’s getting and has looked very strong the last few weeks.  Aldrdige was almost a forgotten man in the Irish backfield coming into this year with sophomores Armando Allen and Robert Hughes getting most of the press, but he has had a nice season so far.  He’s run hard and tough and has looked faster than we have seen him run in his previous two years.

After coming back from the knee injury in high school and then seeing a couple younger kids coming in and jumping ahead of him on the depth chart at times, it’s probably safe to assume that Aldridge probably didn’t imagine it taking him this long to reach the end zone.  Because of that, it was really great to see his hard work be rewarded with the touchdown.  There were a couple times this year James had a couple nice runs to set up touchdown runs without getting the ball at the goalline.

The TD was Aldridge’s 188th career carry and it was a fitting first career score.  It was a hard fought, tough run into a couple North Carolina defenders.  Not much has come easy for Aldridge at Notre Dame and neither was his first TD.

Congrats to James, and here’s hoping we see some more of him reaching the end zone in the second half of the season.

RELATED
Why Notre Dame Should Build Their Offense Around Braden Lenzy