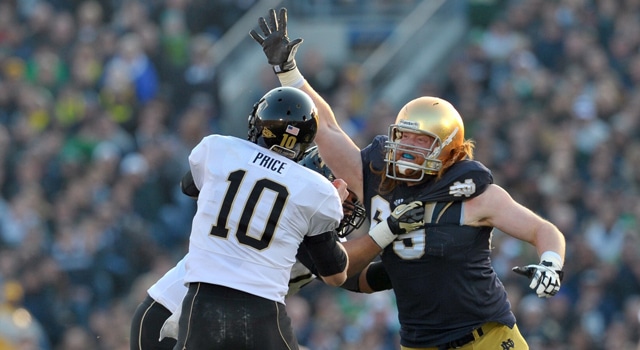 Two of the biggest take aways from Brian Kelly’s 2014 season kick-off press conference were the career ending injury  senior defensive tackle Tony Springmann and the development of the 2014 freshman defensive linemen during summer conditioning.   One on hand the Irish lost a potentially some of the little experienced depth they had along the defensive front, but on the other the early returns on the frosh linemen give hope that those trenches will be fully stocked in short order.

First off, the loss of Springmann can’t be understated.  Notre Dame had so many questions along the defensive line even before Springmann’s latest injury.  Losing Springmann adds even more questions for new defensive coordinator Brian VanGorder to answer before the season kicks off.

After missing the entire 2013 season with an ACL tear and then missing the spring after suffering a setback in his recovery, Springmann was expected to provide depth behind Jarron Jones on the interior of the Irish defensive line.  Outside of Springmann, there aren’t any returning players capable of playing the nose tackle position which means Notre Dame will now be forced to play some freshmen early and potentially often in 2014.

The good news here is that Brian Kelly spoke absolutely glowingly about the young bulls that VanGorder and defensive line coach Mike Elston now have at their disposal. “We got a chance to evaluate our freshmen, and we got a chance to see Daniel Cage and Pete Mokwuah, and really believe with him, with those two guys, and Jarron Jones, that we have got some pretty good depth at that position,” said Kelly on Friday afternoon.

Kelly went on to state that physically, both Cage and Mokwuah are further along than any freshmen defensive linemen they have had on the roster during their time at Notre Dame.  “Their volume is ahead of any of the freshmen that we have had at that position since we have come here,” he said.

Kelly did, however, caution that just because they are physically ready it doesn’t mean they will be impact players from day one. “Both of them physically are able to compete right away,” Kelly said.  “We’ll have to see what their football ability brings, but from a work volume standpoint and from a strength standpoint, and obviously their size, we feel pretty good at that position right now.”

If Notre Dame is able to get significant contributions from either of Cage or Mokwuah this year, not only will it solve a potentially pressing problem for the Irish, it will only add further support the notion of not putting too much stock into recruiting rankings.  While Cage was rated a 4-star prospect by 247 Sports, other services had him as a 3-star and Mokwuah was universally a 3-star prospect.

What would make contributions from Cage and Mokwuah even more remarkable for Notre Dame is the fact that at the beginning of January, Notre Dame fans hardly knew who either prospect even was.  After Notre Dame lost Matt Dickerson to a decommitment and reevaluated their recruiting board following the arrival of VanGorder, the Irish put on a full court press to reel in a few more tackle prospects and was fortunate enough to peel Mokwuah away from Rutgers and won a heated battle for Cage on Singing Day.

Now, before anyone gets too excited.  There are countless examples in the past of hearing Notre Dame coaches sing the praises of some freshmen players who have never materialized into regular contributors let alone impact players.  Given the depth problems Notre Dame has on the defensive line this year though, having two 300+ pound defensive at least able to take reps is a better situation than we’ve seen in the past when undersized frosh were forced into action because of depth issues.  Kona Schwenke comes to mind for instance and right about now I’m sure Kelly and VanGorder would be doing cart wheels if they still had someone with Schwenke’s experience and talent eligible for a 5th year.

The defensive line was already an area to watch closely during fall camp, but this latest injury for Springmann has made it potentially the most important position to watch between now and August 30.