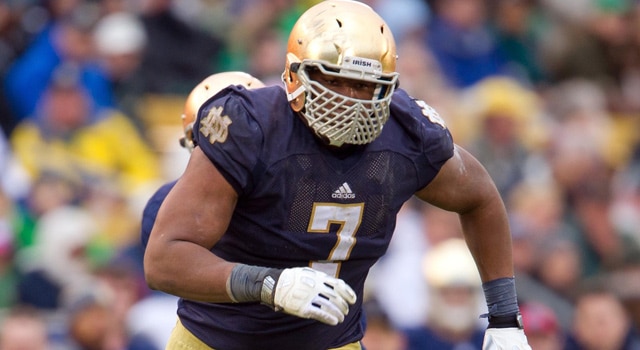 Notre Dame junior defensive end Stephon Tuitt didn’t receive the gift he may have been hoping for from the NFL advisory committee this Christmas.  Tuitt, regarded by many draft prognosticators as a first round lock, received a second round grade from the NFL.

The difference between being a top 10-15 pick and a second round pick is very substantial from a rookie contract perspective.  Compounding matters for Tuitt in making his decision is the lack of ability to renegotiate a rookie contract until three years of service int he NFL are completed meaning if Tuitt leaves for the NFL and gets drafted in second round, he won’t be able to get a big money contract for at least three years even if he lights it up from day one in the NFL.

For Tuitt, getting a second round grade would have seemed highly unlikely heading into his junior season, but 2013 was an up and down season for the mammoth defensive end.  Tuitt was slowed in the beginning of the season as he recovered from off-season surgery and never really hit the dominant grove he showed in 2012.  Tuitt definitely had his moments of dominance in 2013, but he wasn’t as consistently dominant as perhaps some NFL execs would like to see from a top 15 pick.

Should Tuitt return to Notre Dame in 2014, the Irish could be poised for a playoff run with the recent return of Everett Golson last week.  Tuitt would give Notre Dame a formidable defensive line to go along with what should be an improved secondary.

Brian Kelly has been outstanding at convincing players to return to Notre Dame for senior seasons when they’ve had a chance to leave early. Michael Floyd, Tyler Eifert, Manti Te’o, Louis Nix, and Zack Martin have all had a chance to leave Notre Dame early with eligibility remaining.  All came back to Notre Dame, however, and in the case of Eifert and Te’o, they fueled a run to the 2013 BCS Championship Game.

The only time Kelly wasn’t able to convince a player to return to Notre Dame was following his first season with Kyle Rudolph left early after suffering a major injury during his junior season.

Will Notre Dame fans receive a late Christmas gift shortly after the Pinstripe Bowl? No one knows right now, but with a January 15th cut-off for underclassmen to declare for the NFL Draft, we won’t have to wait too long to find out.