The 2019 Notre Dame football team has broken fall camp and is now in full preparation for their first opponent. The Irish held their annual media day on Wednesday with all of the Irish coaches taking their turn at the podium, and a relaxed Brian Kelly spoke for about 30 minutes. No players took part, which was a surprise, but they’ve been made available throughout camp.

One thing that could be taken from Kelly’s press conference, aside from the information, was the confidence he exuded when talking about his program. He wasn’t dressed the nine’s; usually he’s got a nice blazer going, and seemed to feel comfortable with his team and his place in the program. If he’s concerned about this team, he isn’t showing it.

As I have throughout the last three seasons, I’ll be taking stock in the team, what’s trending up and what’s trending down, what I’m buying and what I’m selling, in this weekly column. Last year I did a post-camp report for the folks who haven’t been following the relatively daily updates, and people liked it so here we go again.

Of every player on the offense who has been a frontline player, Claypool is the one player who has been consistently mentioned as having played really well. He’s played so well that Pete Sampson from The Athletic said he could have a Michael Floyd type season. If that is the case, then that kind of shifts the way people think about the offense.

I’m not sure many people thought in the spring and into the offseason that Notre Dame had that type of talent on the offense. Not only would it bring a star onto the field, but it also enhances the games of everyone around him, because a first-round talent at receiver attracts attention in a way that Notre Dame didn’t have the previous three seasons and will allow Ian Book to exploit matchups elsewhere when mismatches are present.

He’s worked his way into a timeshare with Jafar Armstrong, a fact that some see as an indictment on Armstrong, but we’ve seen him play in real games, we know what he can do. If Jones is playing well enough to where the coaches feel he needs some of Armstrong’s touches that can only be a good thing. As for the criticism, Jones Jr. isn’t a home run hitter, there have been several excellent running backs at Notre Dame who weren’t big-play guys. He can catch the ball, he can block, and he’s an aggressive runner — significant development for the team.

I was skeptical coming into camp, and especially skeptical after the first week, but there have been enough reports about the progress he’s made, over several practices, that it’s safe to say he’s made real progress. Notre Dame had two quarterbacks who could beat Michigan last season, not sure that is still the case, but Jurkovec appears to be able to come in and move the team and run the show. Three weeks ago that didn’t seem to be the case, and in football, you need two quarterbacks because Jurkovec will, at some point this year, need to come in and help Notre Dame win a game.

The coaches were bullish on White heading into spring practice, and then he hurt his shoulder in an off-field accident. The team was forced to try and move on without him, and he was somewhat forgotten. But, he rehabbed well and got himself prepared for fall camp, and now it appears he has earned the starting middle linebacker spot. He is likely in some kind of rotation, good chance he comes out on passing downs for example, but he’ll play a huge role against Georgia should he continue to hold the starting spot.

Crawford was rusty in the first weeks of fall camp but came on strong late and figures to play a prominent role on the football team, either at corner, safety, or special teams. In an indication of how talented Crawford is, he’s a 5’8” player who suffered three devastating lower-body injuries that the coaches can’t keep off the field when healthy. What an amazing talent.

Doerer won the kicking competition against walk-on Harrison Leonard, and he did so when his competition was kicking the ball pretty well. This is good news in that Doerer has a much bigger leg, and he has some game experience. Brian Kelly might balk at kicking a 46-yard field goal on 4th and 5, but if it’s 4th and 17 they can give it a go with a kicker who they know can comfortably get it there.

True freshman Bramblett has shown the ability to get some excellent hang time on his punts if not great distance. If he can consistently net out 38-40 yards on his punts, then how far he kicks it won’t matter as much due to the coverage team being given time to get down and tackle the returner. Of course, an ill-timed 38-yard line drive could be pretty problematic.

The two stars on the defense this camp and I’m buying them as being stars not just this season, but for their Notre Dame careers. Two tremendous athletes, and two guys who show excellent instincts and playmaking ability. When Irish fans talk about wanting guys to matchup against the athletes from the SEC, these are the types of players they are talking about. Expect to see both on the field a lot in 2019 and beyond.

Interestingly, this season the team doesn’t have a player that is trending in the wrong direction. Most of the players who are having up and down camps are up and down players who haven’t been in the lineup, so it isn’t fair to say they’re on a downward trajectory. More neutral.

So let’s go with the team’s health. Obviously Young and Kmet are down with injuries for at least three more weeks, Donte Vaughn has been banged up some, and Paul Moala tore a ligament in his thumb and is wearing a cast. None of these are catastrophic, and two of the players have already returned to practice. But, losing two starters for some amount of time isn’t the best and leaves the team vulnerable should anyone else be lost in the coming weeks.

Donte Vaughn Primed to Bounce Back for Notre Dame in 2019 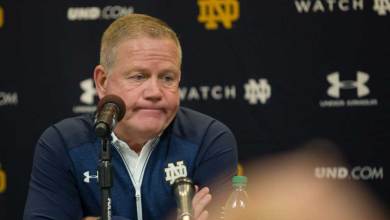 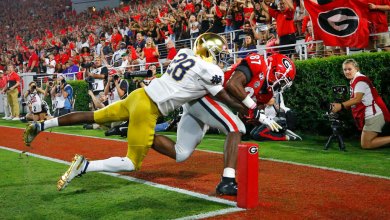 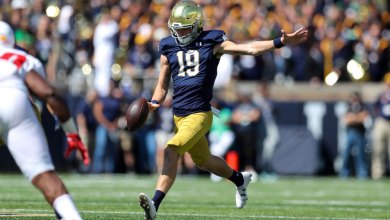 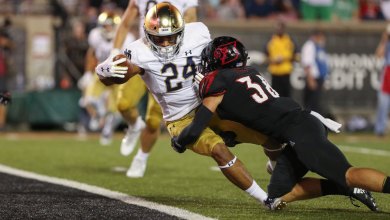