Senior week turned into much ado about nothing week for the Notre Dame football team.

Quarterback Brandon Wimbush returned to the starting lineup against the Seminoles after it was revealed Ian Book suffered an “upper body” injury the previous week against Northwestern, setting off a panic level five amongst Irish fans. There was the initial shock of course; it was unexpected, late in the week, and well people had moved on. We like our RPO’s and every pass being completed. It’s hard to give that up.

Once people had come to grips with the change at quarterback, there was the announcement that sent many over the edge and in need of an intervention: Notre Dame was going to wear green. The team made the announcement in a pretty clever mock video of the “I want Rudy to dress in my place” scene in the iconic film “Rudy”. Backup quarterback plus green jersey’s on Senior Day?  It was defcon one amongst the Irish faithful.

In the end, none of it mattered. Brandon Wimbush threw three touchdown passes in the first half, the defense forced two early turnovers, and Florida State did the things bad teams do to ensure their defeat.

My advice is the next time Notre Dame is able to turn to someone at quarterback who is 12-3 as the starter and beat the #4 ranked team earlier that very season, we collectively have a little more faith.

The insertion of Wimbush was interesting in that it didn’t so much show how much he had improved as a player, but how much the offense had improved while he was out. Wimbush was the same guy he’s always been: at times dynamic and dangerous, others lost and confusing. It was the full Brandon experience. But, we saw his teammates make plays in situations where they haven’t been able in the past, and play at a level that picked up their senior quarterback. Chris Finke made a diving third down catch, Miles Boykin picked a ball out of the air just before it hit the ground, Chase Claypool made a key third down catch and fought for a pass that led to a pass interference penalty.

And my goodness Alize Mack. The senior tight end made two catches that would have made Tyler Eifert stand up and cheer, fulfilling the promise he showed as a freshman in 2015.

The offensive line had their best outing of the year, and Wimbush finally got to play alongside Dexter Williams, who oh by the way ran for 202 yards and two touchdowns. In all, they ran for 365 yards,on 7.3 yards a carry against a run defense that was giving up 110 yards a game on the ground. They also allowed no sacks and had no plays for negative yards. Pretty, pretty, pretty good.

Wimbush needed his teammates on offense last weekend, and they were there for him. That made the experience so much more satisfying.

Has Notre Dame finally figured out their nickel spot? After a season where the Irish used all sorts of different players in the nickel position, they might have finally found their man. Coleman earned the surprise start against the Seminoles and got himself his first career interception on the games second play off of a tipped ball. The Irish scored two plays later. He was solid in coverage all night, breaking up another pass to go with his pick, and Kelly said post game that Coleman would be the guy the rest of the season.

It’s a little unclear why this wasn’t the solution all along, but nevertheless we are here and the final piece of the 2018 defensive puzzle may just be in place.

Generally speaking, it’s sacrilegious to compliment the announcing team, but there has been a lot of nonsense from some pundits over on ESPN and elsewhere about the merits of Michigan being rated above Notre Dame in the College Football Playoff rankings and I appreciated Tirico making the correct, if not completely obvious point to a national audience that if you are looking at two teams who are otherwise comparable and you throw out the head to head matchup, then you have no credibility as an organization.

To quote Wesley from The Princess Bride, “Thank you Mike, sleep well, I’ll most likely kill you in the morning.” 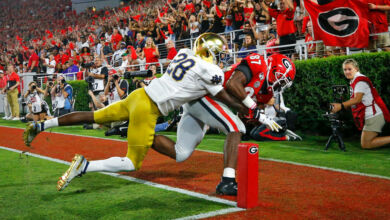 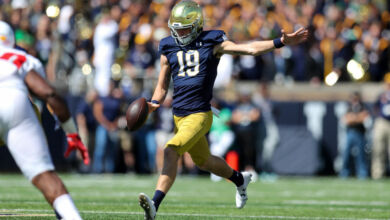 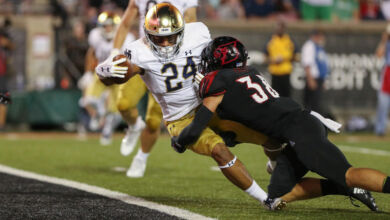