It’s  big one this week folks.  Notre Dame hosts #12 Michigan State in their toughest test to date.  The Irish have zero margin for error thanks to that pesky double overtime loss to Texas to start the season.  We’re going to officially start our Michigan State week coverage on a lighter note though.

It’s been seven years now since Golden Tate’s infamous end-zone jump into the Michigan State band following a go ahead touchdown catch from Jimmy Clausen.  Tate hauled in seven catches for 127 yards, but that touchdown was his biggest play of the game.  The score gave the Irish the lead and helped the Irish beat the Spartans at home for the first time since 2009.

Don’t know if any Irish players will jump into the Spartan band this weekend, but hoping for a similar outcome. 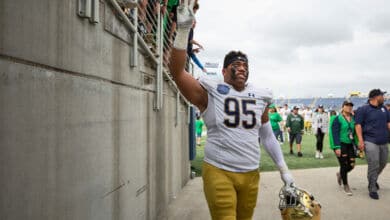