Time for Notre Dame Football to Take Next Step 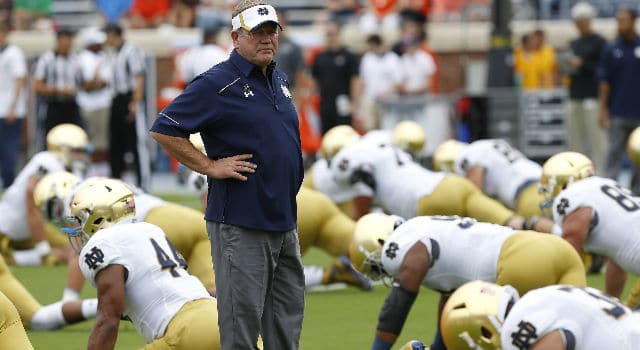 With the coming of the annual USC clash brings familiar feelings for Notre Dame fans, and those feelings come in some form of trepidation. Since the Pete Carroll era Trojans began dominating the rivalry in 2002, there have been some horrifying losses that are etched in the memory of Fighting Irish fans everywhere. In between the 31 point USC victory in the 2002 version to last seasons 35 point thrashing handed out by the Trojans, USC has registered wins by 31,31, 31, 20, 38, 35, and 14. Meanwhile, in the three Notre Dame victories in that time, the largest margin of victory was nine–and that was as the #1 team in the nation in 2012 against a mediocre USC squad playing without injured Matt Barkley at QB. Given those numbers, it’s understandable that fans would suffer from a form of Trojan post traumatic stress disorder whenever we see those cardinal and gold uniforms and hear that god forsaken fight song whenever a USC player makes even a modicum of a play.

Too many bad memories. Too much pain. Too much carnage. As a resident of Southern California, and Carroll’s arrival coming during my college years, it’s been especially painful. The big, bad Trojans will always be big and bad to me, even when they are small and meek.

When Brian Kelly arrived in 2010, he immediately reversed the trend in the USC rivalry, snapping their eight game series winning streak and winning at the Coliseum. Never mind that that particular USC team was horrid and it was a meeting between two unranked teams, we were taking it in any form. When he beat them in consecutive years in 2012 and 2013, there was a thought that we could be witnessing a changing of the guard in Subway Series dominance. Then last season happened, and while it was understandable given all of the defensive injuries and the turmoil the team endured at the end of the season, it still showed that USC was still capable of blowing a Notre Dame team completely off the field.

Heading into the game this Saturday, it is hard not to harbor similar feelings of impending doom, although those feelings are in no way justified. This is, by far, Kelly’s most complete Notre Dame team. The Fighting Irish enter the game ranked 14th nationally in total offense and 34th in total defense, which outranks USC in both categories. They’ve got a stellar offensive line, a running back of which this school hasn’t seen since the days of Reggie Brooks in 1992, a receiver who is averaging over a touchdown a game in his 19 games as a starter, and a linebacker that could very well be a top 10 pick when he elects to get paid to play football. And they have finally become a big play machine, coming in at 11th in the nation in 10 yard plays with 108 through 6 games, and 7th in 50 yard plays with seven.

It would also be remiss to not mention the problems that USC is experiencing with their coaching staff and program right now. In case you didn’t hear, which if you are the type of person who reads an article like this it’s not possible you didn’t, USC doesn’t have a coach, which if you have followed the rumor mill about Steve Sarkisians dismissal, might be a good thing. USC is coming off of a bad loss at home to Washington in which their vaunted offense only registered 12 points, their playoff hopes are gone and their Pac-12 title hopes are in big trouble.

And yet, there is an unshakeable feeling that the turmoil of their poor start and firing of their coach is the best thing that could have happened for them. They are now rid of the distraction that was their coach maybe being drunk during games and team meetings, they can rally around interim coach Clay Helton, walk into unfriendly Notre Dame stadium and shock the world, as the saying goes. We’ve all seen enough of these games to know USC is going to be at a peak on Saturday.

USC’s issues also do them the favor of pitting Notre Dame as the prohibitive favorite in this game, a role that Notre Dame has not relished under Brian Kelly. Two weeks ago against Clemson, Notre Dame entered as the higher ranked team and if you are one of the unfortunate souls that actually watches ESPN Gameday, you would have seen Lee Corso dancing around the stage in a leprechaun suit picking Notre Dame to win. We all know how that game turned out. We’ve seen Notre Dame underperform in big games in which they were favored prior to 2015 Clemson under Kelly’s watch. 2010 Michigan, 2011 USC and Michigan, 2012 Michigan and USC, 2013 Michigan and Oklahoma, and 2014 Arizona State.

You get the picture. Notre Dame doesn’t like prosperity. To be fair, some of those games were victories and winning will always be better than not winning, something that we learned in the Davie-Willingham-Weis era’s. But, if Notre Dame is to take the next step as a program, to rise to the level of schools like Ohio State and Alabama, they need to take these opportunities to show their quality against a team like USC. People know nationally that USC has talent, quarterback Cody Kessler was a Heisman candidate a couple of weeks ago, a big win against a team like USC announces that Notre Dame is ready to be an elite program, not just a good team. Recent history says a big win against USC is not going to happen; USC can win close, they can win really big, or they can lose close. Losing big has never been a part of the equation.

Notre Dame has a chance to change that history on Saturday. We have yet to see Notre Dame’s best game this season, and the unfortunate thing is, we may never see it. Notre Dame has had a tendency of letting opponents in these games set the tone and then trying to match it late. Sometimes it works, sometimes it doesn’t. When I talk of a big win I don’t mean it’s big to beat USC, I mean winning by two touchdowns or more. That’s what playoff teams do, they beat up on wounded and poorly coached teams. USC fits that criteria as well as any team can.

There is talk of a one loss Notre Dame possibly being a playoff team in 2015, and the best way for that to happen is to play like a playoff team should. It’s not good enough to squeak by teams anymore, not a two loss team certainly. There is another saying by coaches that we’ve heard many times over, “leave no doubt.” The goal isn’t simply to win, the goal is to dominate. That’s the next step for Brian Kelly’s Notre Dame, and their first shot is Saturday at home to the team that built their brand on kicking your butt. It’s time to respond in kind.