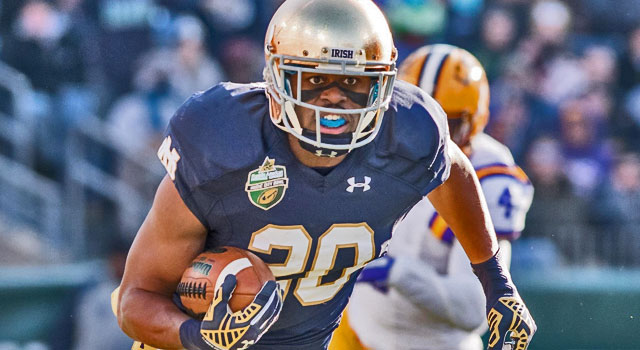 One of the major storylines that emerged during Notre Dame’s spring practice sessions was the stellar performance of slot receiver C.J. Prosise when given the opportunity to cross-train at the running back position.

“C.J.’s as good a player as we’ve got on the offensive football team right now, in my opinion,” said associate head coach Mike Denbrock.  “You saw what he can do if you hand him the ball, and we saw [it] in the LSU game.”

Prosise showcased his potential to be a star in Notre Dame’s Music City Bowl victory over LSU when he rushed for 75-yards on only three carries – a 25-yards per carry average – against the SEC’s No. 1 defense in yardage surrendered.  That momentum carried over into the spring when Prosise rushed for 64-yards on 12 carries in Notre Dame’s annual Blue-Gold game, an average of over 5-yards per touch.  And while the blossoming position flexibility of Prosise is a positive for the Notre Dame offense, there was genuine concern an expanded role for Prosise would be at the expense of former 5-star running back Greg Bryant, who has yet to live up to his high potential.

Such concerns were immediately wiped away by the announcement of quarterback Everett Golson’s transfer from Notre Dame.

Notre Dame rushed the ball 40 times or more in only one-third of its regular season games in 2014 – and, not surprisingly, posted a 3-1 record in those contests – before naming Malik Zaire the starter against LSU.  Due to Zaire’s inexperience and Notre Dame’s injury-ravaged defense, head coach Brian Kelly opted to lean heavily on Notre Dame’s rushing attack to limit Zaire’s throws and help keep the Irish defense off the field.  The end result was a coming out party for Notre Dame’s rushing attack, with the Irish running the ball a season-high 51 times while pounding the SEC’s No. 1 defense into submission.  Now armed with a starting quarterback in Zaire whose biggest weapon is his scrambling ability – and an offensive line anchored by arguably the best offensive tackle in the nation in Ronnie Stanley – Notre Dame will likely transform to a run-first program for the first time under the Kelly regime.

The additional commitment to the run will ensure Notre Dame’s running back rotation not only receives plenty of opportunities, but also allows it to experiment with a new NFL trend while continuing to develop redshirt sophomore Greg Bryant.

C.J. Prosise’s cross-training at running back is creating a hybrid slotback position that is on the NFL’s cutting edge.  The slotback position has become more mainstream in the NFL thanks to extremely athletic players such as Percy Harvin, but NFL teams have begun to transition away from the smaller, speedier slotback to players with larger frames.  The Green Bay Packers drafted former Stanford wide receiver Ty Montgomery – who stands a sturdy six feet and weighs 221 pounds – in the third round of the NFL Draft with the mere hope he can be converted to slotback.

The Packers desired the schematic advantages of the slotback position but with a player large enough to withstand the punishment of being a running back while possessing the skills of a wide receiver.  Prosise, whose measurables are identical to Montgomery’s but with more athleticism, has already proven his ability to play both positions.  He has the size to run between the tackles and the breakaway speed to outrun defenders after a catch.  And with an increased focus on running the football Notre Dame can continue being at the forefront of an evolutionary change within the slotback position without detracting from Greg Bryant’s development.

Bryant, the talented Florida native with seemingly unlimited potential, has been unable to have a breakout season at Notre Dame, with his greatest weakness being his indecisiveness at the line of scrimmage.  The redshirt sophomore’s penchant for dancing instead of committing to a north-south running style has limited his snaps during his career at Notre Dame, though he will receive more opportunities than at any other point this season.  And with Notre Dame’s all-time leading rusher, Autry Denson, as his position coach and mentor – and with former captain Cam McDaniel no longer on the depth chart to poach carries – turning the corner this fall might be a realistic possibility.

How exactly Notre Dame’s foray into the new slotback position will play out, or whether or not Bryant will in fact become the player he has the potential to be this season, is unknown.  But it appears as though both will have plenty of opportunities to find out.