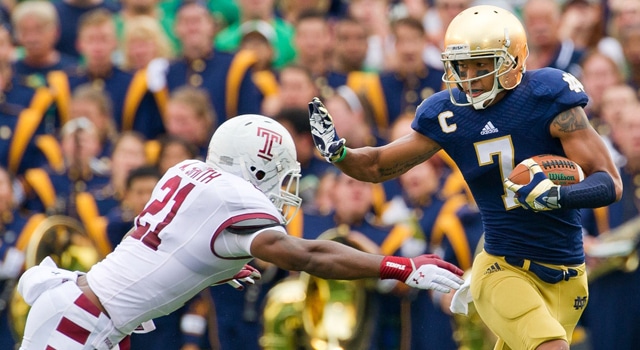 Mel Kiper held a conference call with a number of Notre Dame media folks yesterday and in reading the stories from Blue & Gold and Comcast Sports Chicago, one thing jumped off the page at me.  Kiper is currently projecting TJ Jones as a late round pick if he gets draft at all.

In short, Kiper would have seen a wide receiver whose resume and pedigree would warrant more than a late round pick whom it would be a travesty if he were to go undrafted.

A player’s draft position is not determined on their stats alone.  Production, potential, measureables, and off the field issues are all taken into account when a team evaluates a player’s pro prospects, so let’s take a look at those for Jones.

TJ Jones is producing at an elite level

Production is not an issue for Jones at all.  Through 10 games this season, Jones has racked up 891 yards on 54 catches with 8 touchdowns through the air.  Recently Jones has added a running element to his repertoire as well running 3 times for 41 yards and a touchdown in Notre Dame’s loss to Pitt last weekend.

If we project out Jones’s production over the course of three more games, he will end his senior season with 1,158 yards and 10 touchdowns.  Considering Jones has scored in 7 straight games and eclipsed 100 yards in three straight and 4 out of 5, it would not be surprising if he finished with numbers even better.

Not many receivers have put up numbers like that in their careers for Notre Dame and those who have done so have done so playing with quarterbacks selected pretty highly in the NFL draft themselves.

Almost as important as Jones elite production as a senior has been his steady improvement and development since his freshman season showing that he is still improving and far from maxing out his potential. Each year that Jones has suited up for the Irish he has improved his performance.

That is steady progression from freshman year to senior year with his best season by far coming this season proving that Jones is still improving and only getting better.  Furthermore, Jones has displayed a burst this year we just haven’t seen from him previously and his yards per catch backs that up with Jones averaging more than three additional yards per catch this season.

While Jones may not have the massive size of the Detroit Lions’ Calvin Johnson or be built like a Mac Truck like the Cincinnati Benagls’ AJ Green, Jones has a solid build at 6’0″, 195 lbs.  Eight wide receivers who were 6’0″ or under were drafted in the first four rounds of the 2013 NFL Draft so it’s not as though being 6’0″ or less has scared teams away from draft wide receivers in the first few rounds of the draft in recent years.

From a speed perspective, Jones will very likely run a more than respectable 40 time at the combine.  He probably won’t run a 4.34 like Tavon Austin last year, but something in the 4.45 range is very possible for Jones in Indianapolis in February.

Jones has been an exemplary player on and off the field

You will be hard pressed to find a wide receiver with a better reputation off the field than Jones in next April’s draft.  Jones has been an exemplary player on and off the field as evidenced by his captaincy for the 2013 Fighting Irish.

Jones has never had any off the field issues or run-ins with the law or anything like that either taking any potential character issues off the table as a reason for Jones not being draft or drafted late.  Any GM that makes an investment in Jones can do so knowing that he doesn’t have to worry about Jones getting in trouble off the field or causing any locker room.

Add that all up and it would appear, at least to me, that you have the draft profile of a pretty good wide receiver.  Jones has decent size, good speed, and is an excellent football player – he runs good routes, scores touchdowns, and has consistency made plays on an offense that at times has lack consistency.   Without running a 4.3 or being 6’4″ tall the first two rounds are probably off the board for him, but third round?  Why not?

Find me a wide receiver with a better profile than Jones available in the third round next April and I will be screaming for my Philadelphia Eagles to draft that player.  As is, I’d be thrilled to see Jones wearing a midnight green jersey catching passes in Chip Kelly’s offense after being selected in the third round next fall.