The presence of big men on the Notre Dame offensive line have been a staple for the school in recent seasons. That’s led to a host of high draft picks that have subsequently gone on to make their mark in the NFL. For the 2019 season, one of the Irish players who fits neatly into that category is guard Tommy Kraemer.

Standing at 6-foot-6 and 320 pounds, Kraemer has the athletic versatility to have seen playing time at both tackle and guard during his first two seasons on the field for Notre Dame. His shift to right guard last year partially helped deliver on the expectations when he first arrived in 2016 and serve as the reason why he’s an All-American candidate this year.

Kraemer comes from the football-rich area of Cincinnati, where Brian Kelly coached collegiately before taking the job with the Irish. Despite his status as a lineman, he still managed to win Ohio’s Player of the Year honors in 2015. That recognition was the byproduct of his flattening of defenders and his team’s offense racking up over 5,000 yards of offense.

The Irish recruiting machine was on Kraemer long before that award was bestowed, with the big man actually committing to Notre Dame during his junior year in October 2014. By the time he arrived on campus in 2016 to begin his college football career, his talents had some touting him as an immediate starter.

Despite a spirited battle in camp, however, Kraemer lost out as the starter at right guard to Colin McGovern and ended up being redshirted. By the time the 2017 season got underway, a plan was crafted for Kraemer to share the right tackle spot with Robert Hainsey. That had both good and bad moments for the first-year player. In the latter category, Kraemer’s struggles in the area of pass protection were the most prominent.

That inconsistency and the ample depth of the Irish line had some wondering if Kraemer would end up getting lost in the shuffle for the 2018 campaign. During that year’s spring practice, he began taking reps at right guard and soon found his niche, a path that had been taken previously by Quenton Nelson that led to great success.

Kraemer’s first three games in his new role saw Notre Dame pick up three wins, but his momentum was temporarily stalled by an ankle injury. Trevor Ruhland filled in during the recovery period, then had to move over to the left side after Kramer’s counterpart on that side, Alex Bars, was lost for the season with a knee injury.

The Irish finished the 2018 regular season undefeated, but Kraemer still battled ups and downs when it came to consistency on the line. The positives were his role in fueling a strong Irish running game and being part of a contingent allowing just 19 sacks in the first 12 contests. However, the frustrating aspects of his game also saw things like false starts and other mistakes that tamped down enthusiasm about him.

During this year’s spring practice, Kraemer seemed ready to address his flaws, becoming more agile in order to become an effective pulling guard. In addition, he’s embracing leadership responsibilities on the line, which includes working together with new center Jarrett Peterson to smooth the latter’s transition into the starting lineup.

Despite not having yet reached his potential at the collegiate level, Kraemer enters the 2019 season as an All-American candidate from a number of different media outlets. He’s also a candidate for the prestigious Outland and Rimington awards, putting the onus on him to deliver on the preseason hype.

Taking It to the Next Level

Should he achieve any or all of those accolades, Kraemer stands to make a lot of money by moving on to next year’s NFL draft. Right now, a number of draft-based websites have him pegged as a second-round selection, while some see his ample potential as a reason to choose him in the first round.

DraftBlaster points out Kraemer’s strong skills when it comes to run blocking and notes that his football IQ may end up making him an immediate starter for the team that invests a pick on him.

In the opinion of The Draft Network, Kraemer has the size to dominate and is a strong candidate to move into the first round if he’s able to become more adept when it comes to pass protection.

Gauging the success of the 2019 Irish line may very well depend on how Tommy Kraemer performs during the year. If he’s able to deliver on that promise, it could mean big things on both a team and individual level. 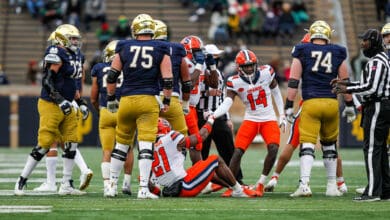 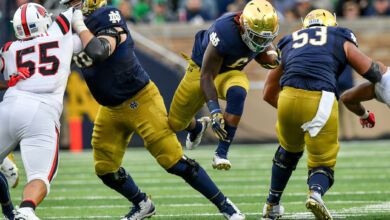