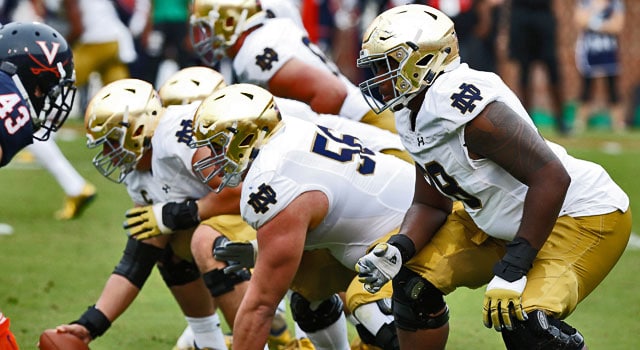 The days are getting longer and the flowers are starting to bloom, which of course signals the start of spring football for the 2016 Notre Dame football team. If you happened to be watching the NFL Combine this past weekend, you would have noticed a few familiar faces that recently donned the shiny gold helmets for our beloved Fighting Irish. Make no mistake people, Will Fuller and Ronnie Stanley, et al, won’t be walking through that door next season to dazzle us with their (4.32) speed, or their road grading blocks. In all, seven starters from one of the most prolific offenses in school history need to be replaced.

As the Irish embark on another spring football edition on March 16th, here are five storylines to follow that will shape how the 2016 defensive version of the Fighting Irish look September 3rd in Austin, Texas and beyond. (The quarterbacks will not be talked about, at least not specifically. UHND wrote about a solid piece about that competition back in January and, needless to say, that situation deserves it’s own space.)

If you’re into that whole Twitter/Instagram thing, you may have noticed starting left guard Quenton Nelson drop a little nugget of information as to who will be replacing Ronnie Stanley at left tackle. With McGlinchey moving over to the left side that means the entire right side of the line, plus the center, will be brand new heading into 2016. Odds are that guard/tackle Alex Bars, who Kelly once called the “best young lineman I’ve seen in my 25 years of coaching”, figures to start somewhere, either at guard or tackle. It is likely he will do some cross training as he works his way back into form after breaking his ankle against USC. The interesting thing is, where Bars starts may not be entirely up to him.

Hunter Bivin, the former four star, top 100 tackle according to 247, will be given the chance to compete at right tackle with Bars and should he impress, he could move his linemate over to right guard, some of which Bars played as a sophomore. But, here’s the rub. Colin McGovern, the former four star, top 200 guard, will be competing to start at the right guard spot, and should Harry Hiestand feel the McGovern is better at guard than Bivin is at tackle, McGovern could push Bivin right out of the lineup to make way for Bars. So in essence, Bivin and McGovern will be competing against each other, while playing side by side. Should be awesome.

Meanwhile, junior Sam Mustipher and sophomore Tristen Hoge will vie to replace former captain Nick Martin at center. Incredibly, the job could come down to whether or not Mustipher can fix his little problem of not being able to snap the ball consistently. Hoge, who Brian Kelly has spoken very highly of, might have the goods to win the job outright. If Mustipher continues to struggle snapping the ball, it may not be much of a competition.

Where Are You Torri Hunter Jr.?

This one actually has two purposes. First, is Hunter Jr. actually out at spring practice with the football team? You might have heard that he recently registered his first collegiate hit with the Notre Dame baseball team, and being that his father was an all-star center fielder, it’s unlikely he’s going to give up that little hobby, if he even considers it a hobby. Will he miss practice time? How will that affect his development?

Second, he returns as Notre Dame’s best receiving threat, at least in terms of experience and ability, and it’s been said that he can play any of Notre Dame’s three receiving positions. He garnered most of his snaps in the slot for the Irish last year, notching 28 receptions for 363 yards and two scores. He possesses a skill set similar to that of former receiver Rhema McKnight, who as a senior tallied 67 receptions for 907 yards and 15 scores. Most would consider it unlikely that Hunter Jr. would reach those numbers, simply due to the nature of the offense, but he’s big, quick and has shown sure hands in his limited time on the field.

But, where will that be? In the slot, with Equanimeous St. Brown at the X, allowing Corey Robinson to battle it out with Miles Boykin at the W? Or is CJ Sanders too good to keep off the field in the slot, with Hunter Jr. moving over the the W position? Will he move all over the place? Tracking his movements will should give us some hints about how good the staff really feel these young receivers are.

Now or Never for Justin Brent

CJ Prosise stated at the NFL combine that part of the reason he decided to turn pro was he wasn’t sure how much of a role he would have at running back for Notre Dame, or that he would even be playing running back next season. Such is the state of the position for Notre Dame in 2016. We know Adams and Folston will enter the fall as numbers one and two on the depth chart, in some order. As such, they aren’t likely to receive a ton of work in the spring; they are known commodities.

As far as physical skills go, Brent has to be right up there with the best on the Notre Dame roster. He gallops around the field like Ricky Watters used to at various positions for the Irish during his time on campus, and yet he has not been able to make a meaningful contribution on game day thus far in his two year career. A lot of this would seem to be due to his head not exactly being where it should be, to put it one way, and he was moved from receiver to running back prior to the opener last season. Sophomore Dexter Williams and Brent are likely to see a ton of work this spring as the staff tries to determine who can be the third back for the Irish in the fall. Whoever wins that job is likely to see at least some game action every week, and given the Notre Dame propensity for injuries could vault to #2 and a heavy part of the game plan in an instant.

If Brent can’t make that push before the freshman arrive in the fall, his path to the field might be closed off permanently.

Can Aliz’e Jones Make The Leap?

When going over the list of scapegoats for Notre Dame’s red zone struggles, the lack of production from the tight end position was a frequent flyer in that conversation. Other than Durham Smythe’s touchdown off of a fake field goal against Virginia, the tight end position accounted for zero touchdowns in 2015, which when you think about it is pretty incredible, given how much production Notre Dame has received from that spot during the Kelly era. The return of Smythe from injury should help remedy those issues, but the uber talented sophomore from Las Vegas is what can set Notre Dame apart offensively in 2016.

It’s commonly accepted that Jones was pressed into a much bigger role than he was ready for as a true freshman, most notably with his struggles as a run blocker. He was frequently replaced in the run game by Tyler Luatua, which generally was a signal to the defense what type of play was coming. When Jones committed to Notre Dame he stated his desire to be a complete tight end, which set Notre Dame apart from the others for his athletic services. He’ll definitely be motivated to improve as a blocker and take his game to the next level as far as being a capable two way player, that hurts teams through the air and on the ground. His development is vital for an offense that lost so many weapons from last season.

How Motivated is Brandon Wimbush?

One of the more eye opening nuggets from the Brian Kelly signing day press conference was the declaration that Brandon Wimbush would redshirt in 2016. It shouldn’t come as a complete surprise; the plan all along was for him to redshirt his freshman year and begin competing for time this year. Of course, this was before Golson left, Zaire got hurt, and Kizer had one of the best passing efficiency ratings for a first year player ever. Because of all that attrition, Wimbush was pressed into duty and dazzled in his first Notre Dame opportunity against UMass. Now that Zaire is healthy it would make sense that Wimbush would now redshirt and pick up the quarterback competition in 2017.

The other side of the coin is, it’s easy to see how Wimbush would have a little bit more urgency to show his skills, now that Kizer is a real threat to usurp Zaire at the quarterback position–especially when Kizer has three more years of eligibility going into 2016. He could be the man at quarterback for the foreseeable future. Will Wimbush take a back seat to the Zaire vs. Kizer quarterback battle? Or will he attempt to showcase his considerable skills for the coaches and perhaps change their minds about redshirting him for the upcoming season?