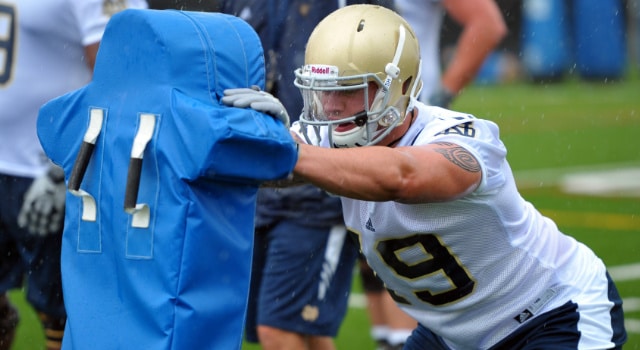 Aaron Lynch has decided to transfer from Notre Dame after earning Freshman All American honors a year ago as a frosh. (Photo - Matt Cashore / USPresswire)

The recruitment of Aaron Lynch was one of the most unique, drama filled recruitments we’ve seen since we began covering Notre Dame recruiting in 1997.  The saga continued on Friday when Brian Kelly announced the rising star defensive end will be transferring from Notre Dame.

“Aaron recently approached me about his desire to leave Notre Dame and return to Florida,”  Kelly said on Friday before adding, “I’ve always known and appreciated the affinity Aaron has for his home in Florida,  however, the stark reality is you can’t make it at Notre Dame if your head and heart are not here.”  Kelly also went on to say, “I am proud of the effort Aaron made in the classroom and on the field at Notre Dame. I wish him all the best in the future.”

And now Notre Dame is out one extremely talented playmaker along a defensive front seven that had the opportunity to be one of the best the school has seen in years prior to the news of Lynch’s desire to transfer.

Lynch had left Notre Dame last week after a practice altercation with offensive lineman Tate Nichols, but at the time Kelly expressed optimism that Lynch would not be transferring at the time.  Lynch did return after the weekend, but decided at some point this week his return to campus would not be permanent.

Current speculation as Lynch transferring to South Florida where we would be playing for Skip Holtz, son of Notre Dame coaching legend Lou Holtz.

UHND will have more on the loss of Lynch and how it impacts what the Irish will have to do to overcome the loss of one of the most truly dynamic players on the Irish roster.