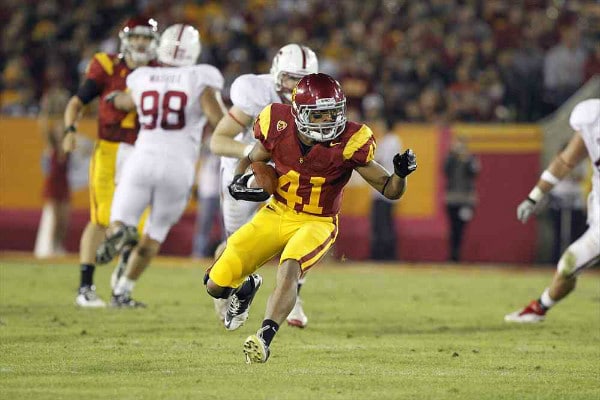 USC transfer Amir Carlisle was granted a waiver by the NCAA to be eligible to play this fall without having to sit out the typical year. (Photo / Ric Tapia/Icon SMI)

While Notre Dame received the disappointing news that Tee Shepard would no longer be enrolled at Notre Dame last week, the Irish did receive a bit of good news when word spread that USC transfer Amir Carlisle was granted a waiver by the NCAA to be eligible to play this year without having to sit out the traditional year after his transfer.

After making the move, Carlisle petitioned the NCAA for a hardship waiver in order to be eligible to play this fall for Notre Dame.  Typically a transfer has to sit out a year before they are eligible to play for their new team – as Jordan Prestwood was a year ago when he transfered from Florida State to Notre Dame.  In this case, however, the NCAA granted the waiver allowing Carlisle to see the field this fall.

Carlisle will immediately challenge for playing time as a running back/slot wide receiver for the Irish this fall.  He is dynamic in the open field and is an excellent receiver out of the backfield.  Carlisle received rave reviews out of fall camp for USC last year, but was slowed by a few nagging injuries that limited his impact on the field for the Trojans.

Notre Dame will have a number of options at the running back/slot receiver position that the coaching staff combined this off-season in addition to Carlisle as well.  Theo Riddick will have one year of eligibility left to fullfil his potential while some newcomers like incoming freshman Davonte Neal will throw their names into the mix as well.   Just how Kelly and offensive coordinator Chuck Martin plan to use these versatile backs/receivers remains to be seen, but at the very least the offensive coaching staff will have some dynamic playmakers at their disposal.

Notre Dame Back in Prime Time in 2012