A tight Notre Dame roster situation is starting to work itself out following Saturday’s news that Corey Holmes has decided to transfer.  The junior will graduate in the summer and have two years of eligibility remaining after redshirting as a sophomore.

Holmes came to Notre Dame as a highly rated, 4-star recruit out of Florida’s St. Thomas Aquinas – one of the Sunshine State’s strongest programs, but didn’t make much of an impact on Saturdays for the Irish.  He is reportedly looking at Miami, UCLA, Arizona State, Arizona and North Carolina currently.

Holmes was not guaranteed to have a prominent role next fall as a senior for Notre Dame.  Both Equanimeous St. Brown and Kevin Stepherson exceeded expectation this season and looked primed for big roles as outside receivers for the Irish offense in 2017.  CJ Sanders returns after starting most of the year at the slot and former walkon Chris Finke had a strong finish to the season and displayed some sure hands in scoring in each of the last two games.

A pair of 2016 freshmen – Chase Claypool and Javon McKinely – could be ready for much bigger roles next fall too.  Then there’s rising junior Miles Boykin.  The massive target finally saw his number called in the redzone against Virginia Tech for his first career touchdown and his lack of use in that area is still puzzling.

Add all of that up and Holmes could have easily seen a minor role again in 2017.  Despite a breakout performance in the spring with CJ Sanders shelved with an injury, Holmes caught just 11 passes for 96 yards and didn’t reach the endzone.  He’ll end his Notre Dame career without ever scoring a touchdown and just those 96 yards despite the high accolades.

With Holmes set to transfer, Notre Dame will almost certainly look to add at least one more wide receiver in the class of 2017.  Notre Dame has two current commitments, but as of now they would have nine scholarship receivers next year without adding any more before Signing Day.

Last week Notre Dame also lost Malik Zaire and John Montelus to graduate transfer.  Neither was particularly surprising though.  When Zaire lost the starting quarterback spot to Deshone Kizer following the loss to Texas the writing was on the wall that Zaire would likely be looking for a new school as a senior.  Even with the NFL decision of Deshone Kizer unsettled, either outcome was unlikely to impact Zaire’s decision.

Montellus, like Holmes, came to Notre Dame as a 4-star recruit but never panned out for the Irish.  After spending a brief stint on the defensive line in the spring, Montellus moved back to the offensive line this spring, but was never in the mix for the starting left guard position in fall camp.

With precious few spots available for 5th year seniors in 2017, it’s likely this will not be the last transfer that we learn of for the 2017 Notre Dame roster. 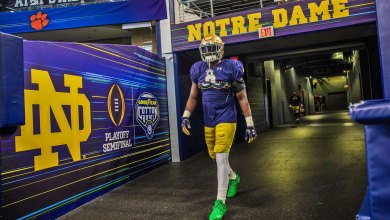