Rising sophomore tight end Joseph Fauria was suspended for the upcoming semester earlier this week by the office of Residential Living.  Up until Friday, it was assumed that Fauria would sit out the season and then rejoin the Irish for the 2010 campaign.  This afternoon, however, it was reported that Fauria will instead be transferring from Notre Dame and won’t be back with the Irish. 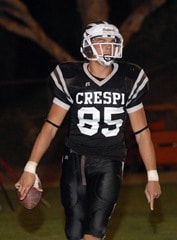 On Wednesday Charlie Weis announced that Fauria would not be with the team for the upcoming season, but that he hoped Fauria would be back in the spring.  The oh so vague “personal reasons” explanation was given as the reason for Fauria’s departure.  Since then a bunch of rumors have popped up on the various Irish forums and blogs. Out of respect to Fauria, I won’t post them here since he has yet to give any details into his departure.

Friday a number of reports with some unflattering quotes towards the University surfaced stating the Fauria intended to transfer instead of sitting out the season and rejoining the team in 2010.

Fauria told Irish Sports Daily that he felt mistreated by the Office of Residential Life.

” I’ve always been a fan of Notre Dame, but I was mistreated by the Office of Residence Life,” he said. “They mistreated me very much. Something happened at school and I don’t think the punishment fit the crime. They didn’t handle the situation how it should have been handled. I guess they were trying to make an example out of me and I was not the person to do it to.”

Whether or not the suspension handed down by Res Life was warranted or not, this is sure to be used against the Irish on the recruiting trail by opposing coaches.

The only silver lining, if there can be one in a situation like this, is that Fauria gave the Irish coaching staff a ringing endorsement on his way out.

From the same ISD report:

“I’m not leaving because of the coaching staff. I love all of the coaches. My tight ends coach Bernie Parmalee was amazing, my recruiting coordinator Brian Polian, I was really close to him, he was great,” said Fauria. “I loved being coached by Coach Weis. It was great, he knew what he was doing. I’m proud to say that I was coached by him and that I was able to play for him.

The loss of Fauria is a killer for the Irish offense in 2009.  He was one of the biggest surprises this spring and had passed Mike Ragone as the #2 tight end on the Irish depth chart and had a very bright future ahead of him.  Without Fauria in 2009, Notre Dame will have just two scholarship tight ends with playing experience.

Despite some stellar recruiting at the tight end position over the last four years. Notre Dame will once again have a depth problem at the position this season.  Fauria joins Konrad Reuland and Will Yeatman as the third tight end to transfer from Notre Dame in the last three years.