What’s the Plan with Malik Zaire as Notre Dame’s Starting Quarterback?  ‘Kick Some A**’ 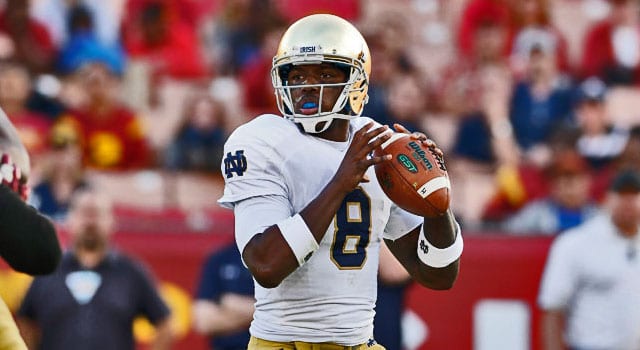 Quarterback Everett Golson has done the expected and will transfer from the University of Notre Dame.  Now that Irish fans have had several days to digest this latest development, the true impact of Golson’s departure can be examined.a

The most immediate impact is the ascension of junior Malik Zaire to the starting quarterback position, but another critical advancement involves sophomore quarterback DeShone Kizer or incoming freshman quarterback Brandon Wimbush becoming Zaire’s backup.  Notre Dame has suddenly transitioned from great depth at the quarterback position to none at all, with Kizer redshirting his freshman season and receiving almost no spring practice repetitions and Wimbush yet to even arrive to campus.

The natural instinct is to protect the starting quarterback.  With no experience behind Zaire the road to success is completely paved by the newly-named starting quarterback’s ability to stay healthy, which is problematic given Zaire’s greatest weapon is his legs.

The conundrum Notre Dame currently finds itself in is surprisingly similar to the problems faced against LSU in the Music City Bowl.  How could Notre Dame defeat an SEC team for the first time in nearly a decade when starting a first-time quarterback in Malik Zaire?  How could the Fighting Irish even hope to win when seemingly half the Notre Dame defense was on life support and set to face one of the best running backs in the nation in Leonard Fournette?

The solution was beautiful in its simplicity, although challenging in execution, and was described eloquently by starting right tackle Mike McGlinchey.  In what should go down as one of the greatest quotes in program history, when asked by reporters after Notre Dame’s victory over LSU what the game plan involved, the six-foot-seven-inch McGlinchey grunted, “Kick some ass.”

Notre Dame’s game plan against LSU was to ride the coattails of its most talented unit – the offensive line – and literally pound the storied SEC program into submission.  The plan worked to perfection with the Irish offense rushing the ball 51 times and piling up 263 yards on the ground, and Malik Zaire capturing Music City Bowl MVP honors.

The solution to Notre Dame’s depth concerns at quarterback for the 2015 season is also beautiful in its simplicity but challenging in execution, and once again is best described by McGlinchey: kick some ass.

The time has come for head coach Brian Kelly to completely unleash his offense in year six of his program.  Kelly has been hampered by innumerable setbacks at the quarterback position during his time in South Bend, from Jimmy Clausen declaring early for the NFL draft, to Dayne Crist’s struggles with injury and development and Everett Golson’s academic misdeeds and ultimate transfer.   Letting Zaire loose and allowing him to run with the football with no depth behind him is concerning, but Notre Dame needs to push all of its chips into the center of the table and play as though there is nothing to lose.

It has been many years since Notre Dame has possessed this much talent on its offensive depth chart.  Offensive line coach Harry Hiestand has put together one of the best units in the nation to clear a path for talented running backs Tarean Folston and Greg Bryant, as well as dynamic slotback C.J. Prosise.  The Irish have a home run threat at wide receiver as good as any other in the country in Will Fuller and a towering safety outlet in possession receiver Corey Robinson.  The Notre Dame offense has the potential to be great if Zaire is allowed to aggressively maestro its performance.

In reality, Notre Dame doesn’t have much choice but to let its offense run wild.  Much like the game plan for LSU – a contest where LSU running back Leonard Fournette averaged over 13 yards per carry – Kelly had to lean on his ability to run the ball to help his porous and injury-ravaged defense.  Notre Dame finished 71st in the nation in total defense in 2014 and surrendered an average of 43-points per contest in its last five regular season games.  While injuries played a large role in the defensive downturn, questions also remain as to whether or not defensive coordinator Brian VanGorder has an answer to up-tempo offenses, as witnessed by Notre Dame’s humiliating 49-14 defeat at the hands of USC during the 2014 regular season finale.  Brian Kelly has to let Zaire operate the full spectrum of the offense despite the risk of injury because he has no choice – Notre Dame will need to score often to assist its vulnerable defense.

An aggressive offensive approach offers high risk and high rewards, but it’s an approach that can help Notre Dame defeat the best teams in the country, as it did against LSU in the Music City Bowl.  In year six of the Kelly regime, it’s better for Notre Dame to lose a bar fight trying to kick some ass McGlinchey style than Mayweather it in the hopes of conservatively hugging their way through the 2015 season.

The stage is set and the talented quarterback from Kettering, OH now has the floor.