Much has been made about Michigan State’s six game winning streak inside Notre Dame this week.  The Spartans have made Notre Dame Stadium a second home since Lou Holtz left Notre Dame with the last Irish win over Sparty inside the House that Rock Built coming in 1993.  Here’s a look at how their last six trips to South Bend have played out.

2007 – MSU 31, ND 14 – During the disaster that was the 2007 season, Michigan State came into Notre Dame Stadium with Notre Dame still looking for its first offensive touchdown of the season in week 3.  Notre Dame jumped on the board first after a Trevor Laws fumble recovery set up the Irish offense inside the MSU 10 yard.  Notre Dame actually moved the ball on the ground for the first time in the season in this game after Charlie Weis announced the Irish would be going back to training camp following Notre Dame’s embarrassing 38-0 loss in the Big House the week before.  Robert Hughes got his first career touchdown in this game.  The Irish trailed 17-14 at halftime but allowed two MSU passing touchdowns in the third quarter and couldn’t score again.

2005 – MSU 44, #10 ND41 (OT) – Charlie Weis’s first game in Notre Dame Stadium was a thriller with the 10th ranked Irish coming off an upset of Michigan on the road.  Notre Dame trailed 38-17 with less than two minutes remaining, but scored three touchdowns in the final 16 minutes to tie the game and send it to overtime.  Notre Dame had a chance to end the game in regulation after the Irish defense forced a turnover with less than two minutes to go and set up the offense with the ball at the ND 45.  After shredding the MSU defense in the fourth quarter though, the offense went three and out and the game went into overtime.  Notre Dame got the ball first and could only manage a DJ Fitzpatrick 44 yard field goal.  Michigan State scored on their second play and went on to plant the flag at the Irish 35.  Brady Quinn set a Notre Dame record with five touchdowns in this game – a record he would later break against BYU a few weeks later.

2003 – MSU 22, ND 16 – Ty Willingham’s first game against MSU in Notre Dame Stadium came on the heels of another 38-0 blowout loss in the Big House.  Carlyle Holiday started his final game at quarterback for the Irish in the loss with Brady Quinn taking over the reigns the following week against Purdue.  This was another game that was close until the end when MSU scored 9 points in the fourth quarter thanks to a field goal and an interception returned for a touchdown.  In a reoccurring them in this series Notre Dame couldn’t run the ball and had a hard time stopping Michigan State from doing the same with the Spartans outgaining the Irish 181 to 100 on the ground.

2001 – MSU 17, #23 ND 10 – Notre Dame opened its season with a 27-10 loss in Lincoln to Nebraska in a game that was actually not as close as the score indicated.  The Irish couldn’t move the ball in the air in 2001 with neither Matt Lovecchio or Carlyle Holiday unable to show much consistency.  Notre Dame ended up losing its first three games in 2001 after going to the Fiesta Bowl the season before.  The losing streak to start the season was the beginning of the swan song of then head coach Bob Davie.

1999 – MSU 23, #24 ND 13 – Notre Dame limped into the 1999 Michigan State game after back to back last minute, heart breaking losses to Michigan and Purdue.  I wrote an article earlier this week about how the Michigan game last weekend was very similar to the 1999 UM game with the way it ended.  The week after the ’99 UM game, Notre Dame traveled to Purdue and lost another game in the final minute after some very poor clock management left the Irish knocking on the door at the goalline with no time left on the clock.  Against MSU, the Irish went into the fourth quarter tied at 7, but gave up 16 points in the last 10 minutes of the game and ended up losing 23-13.  Gari Scott put the exclamation point on the Spartan win with an 80 yard touchdown reception from Bill Burke on a 3rd and 10 with the game still tied at 13.  The previous year, Notre Dame lost to MSU when the Spartans converted a 4th and 10 for a touchdown in the final minutes with another long passing touchdown.

1997 – #17 MSU 23, ND 7 – In Bob Davie’s second game in Notre Dame Stadium, the Irish couldn’t stop the Spartans from running the ball with Michigan State amassing 232 yards on the ground.  Both Sedrick Irvin and Marc Renaud went over 100 yards for Michigan State while Notre Dame failed to rush for 100 yards as a team.  This was the second of four consecutive losses during Davie’s inaugural season as the head coach of the Irish and was Notre Dame’s first loss to Michigan State regardless of the location in 11 years. 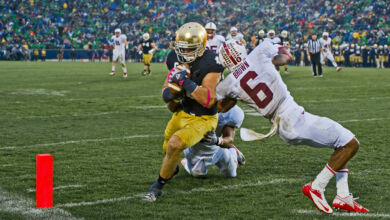 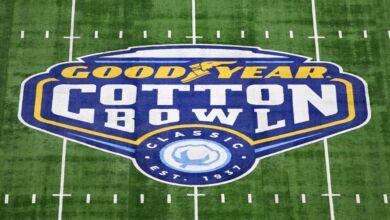 A Look Back at Notre Dame’s Cotton Bowl History