The History of the #3 Jersey for Notre Dame Football 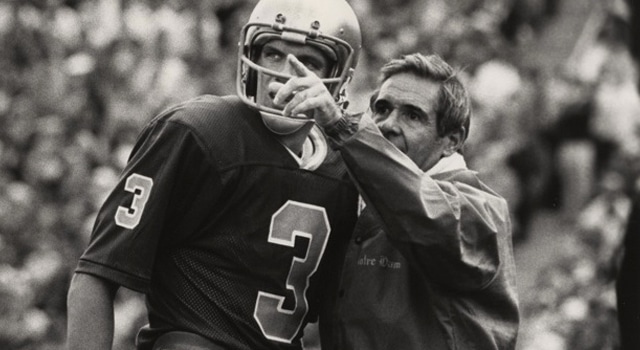 It seems that the number “3,” that number of Ruthian power and strength, has always been the number of the “chosen one” at Notre Dame.  For example, how many of Notre Dame’s seven Heisman winners wore Number 3, right?  Gotcha! The answer is NONE.  Bertelli  48,  Lujack 32, Hart 82,  Lattner 14, Hornung 5, Huarte 7, Brown 81. Well, was it Gipp’s number?  No, when the Gipper played, they didn’t even use numbers yet!

But here at Notre Dame, traditions are organic, dynamic, as new blood, guts and dreams move the Irish folklore ever forward.

You see, in the 50’s “3” was primarily a quarterback number and seemed to fit best for Italian-American quarterbacks.  Ralph Guglielmi ’51-’54, George Izo ’57-’59 and Daryle (later the “Mad Bomber”) Lamonica ’60-’62 all wore #3 for the Irish. Each of the three had some significant years in the NFL.  It was so popular a number for Irish quarterbacks that Coleman Carroll O’Brien chose the “3” jersey and wore it proudly against Michigan State and USC in the championship season of 1966.  It was a favored  number, but not an iconic one.

Then THE ICON arrived.  In fact some would argue, that at least since George Gipp and the Four Horsemen, this guy was the most charismatic player ever to don a Notre Dame uniform.  And you know he’s coming, from Ringgold High School in Monongahela, Pennsylvania, Joe Montana.

Ara recruited him in ’74, and let Montana wear “3” while watching Tom Clements command the varsity.  In ’75 Montana started against Michigan State, SC and Navy.  But the urban legend was born when he came off the bench to lead thrilling comeback wins over North Carolina and Air Force.

Whatever “it” was, Joe had “it”, and in mass quantities.  But then he broke his finger and was out for the year, and for that matter, all of ’76.  These kid fans think they’ve seen tough times.  You know what tough was?  Knowing Montana was on campus and having to watch Rick Slager quarterback the ’76 Irish.  The Horror, the Horror!

Then came ’77,  and in a gutsy roster move, Devine allowed Montana to leapfrog over the competition to become a solid third stringer behind Lisch and Forystek.  Rusty Lisch struggled, Forystek got injured and this time, when Montana got in, he Wally Pipped everybody and kept doing amazing things.

The ’77 USC rout, the Texas rout in the cotton Bowl and the National Championship. Just when you thought he was all charisma’d out,  he led the ’78 team, which outplayed, but never outreffed, SC in the Coliseum.  Ol’ #3 had one game left and  then produced his Eroica in the Cotton Bowl against Houston.
A Hollywood writer would be drummed out of town for this script:

Taking all this in about 25 miles from South Bend was a bright little kid, Rick Mirer, living in Goshen and dreaming golden dreams.  Rick channeled  Joe Montana, #3. Oh, it was worn by Harry Oliver and Alonzo Jefferson, but Mirer only dreamed dreams of Montana’s magic. When Vinny Cerrato came a’calling, Mirer was eager to sign the LOI. And he chose #3.

And here is where #3 really took off.

You see, after the near miss ’89 season, a peacock alilghted on the lawn just outside the admin bulding.  That  peacock belonged to NBC.  So in 1990 the Irish had a national TV contract and all home games were televised.  When #3 Rick Mirer quarterbacked the Irish, a nation turned its lonely football eyes to him.

At this time, capitalism’s tree sprouted another branch, replica jerseys.  And no college jersey sold like the jersey for the Notre Dame quarterback.  Of course it was #3. Up in North Central Pennsylvania, not far from Shamokin, another young quarterback, coached by George Curry, watched intently.  He lived in Berwick and his name was Ron Powlus.  And he signed with Notre Dame.

SIDEBAR:  Powlus is perhaps the most unfairly maligned player ever at Notre Dame.  The great defensive tackle, Melvin Dansby said that when they first saw Powlus they were shocked because they thought they were watching Joe Montana.  Powlus ran  a 4.65, and was completing everything.  Then he broke his collarbone. His confidence, as well as his collarbone,  was shattered, and then again, in late October.  He was no longer the Golden Child, he was just a football player.  McDougal was wondrous in ’93, and then a muted, less confident less athletic Powlus took over in 1994, setting a bunch of records in Lou’s twilight.  He was a victim, not a perp.

In Shreveport, a young quarterback from Admiral Byrd watched, and when the time came, Arnaz Battle said yes to Notre Dame, pointed to the #3 jersey and said “that’s for me.”

Arnaz Battle moved , with his jersey,  from QB to the wide receiver position, breaking the custodial chain of the quarterback position.

In Georgia, the kid who broke Hershel Walker’s high school rushing records, watched intently, and liked the way a skill player like Battle looked in the #3 jersey.  Darius Walker headed north, put on the #3 jersey, and slithered and juked for a lot of yards for the Irish.

Up in the Twin Cities, an uncharacteristically swift and sure handed Minnesotan watched, and then Cretin-Durham’s Michael Floyd said yes to the Irish, put on the #3 Jersey and rewrote the record book for Notre Dame receivers.  At this point, the #3 had as much resonance with offensive skill players like Battle, Walker and Floyd as it did with the Irish quarterback position.  Amir Carlisle migrated from USC to Notre Dame, and he convinced the staff that he was worthy wearing Floyd’s old jersey number.

In February 2013, a kid stepped up and said it was time to have “his” defense step up and be equal to the magic and tradition of the offense.  Eddie Vanderdoes, fueled by his chaperon, his mentor, the erstwhile “elder statesman” Louis Nix, was dreaming dreams and seeing visions, and chose what 18 year olds never do: accountability and pressure.

And in the ancient book, it is written “Then I hear the voice saying: Who shall I send? Who will go for us?  And he answered “Here I am, send me!”

And Eddie said “Send me!”

Vanderdoes’ first take away as a Notre Dame player was when he “took away” the offensive exclusivity of the “3” jersey and commandeered it for the defense.  Eddie did more than sign an LOI.  He said yes to the tradition, committed to the excellence, and will take “3” to the next level, a defensive level, in his career at Notre Dame.  Wear it proud, Eddie!

UPDATE: Since the posting of this original article, the Eddie Vanderdoes saga culminated with the highly touted prospect never even enrolling at Notre Dame, let alone wearing the #3 jersey for the Irish.  Vanderodes ended up at UCLA where he played for three seasons before leaving early for the NFL.  Meanwhile, over the last few years at Notre Dame the #3 jersey has largely been worn by more skill position players.

Another Quarterback Takes on #3, Kinda

In the spring of 2018, Notre Dame sophomore quarterback Avery Davis switched his jersey from #13 to #3.  His jersey wasn’t all he potentially switched though.  During the spring the Notre Dame coaching staff approached Davis about a hybrid role that took advantage of his athleticism while he was stuck at 3rd on the depth chart.  Davis took to the new role well and displayed playmaking ability in the annual Blue & Gold game setting up a interesting developmental year for the gunslinger from Texas.

Highly rated prep safety Houston Griffith also took on the #3 jersey in the spring as an early enrollee for Notre Dame.  Hopefully for Notre Dame’s sake Griffith has much more of an impact than Vanderodes did as a #3 on defense.