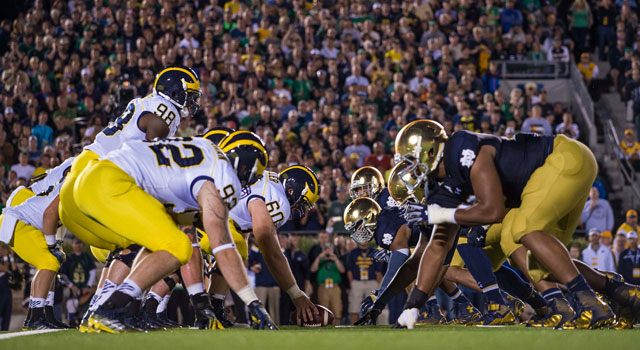 Notre Dame and Michigan renewing its rivalry is a good thing for both programs. (Photo: Matt Cashore // USA TODAY Sports)

The news surrounding this series was picking up over the last several months and it was obvious from Brian Kelly’s response that both he and Harbaugh had been working on renewing this series for quite a while. Michigan reportedly even paid Arkansas $2 million to cancel their games with the Razorbacks and replace them with the Irish.

The Notre Dame Michigan Rivalry ended on September 6th, 2014 as Notre Dame beat the Michigan Wolverines 31-0. The game should have been 38-0, but the pick 6 by the Irish as time expired was called back when Max Redfield laid out Michigan Quarterback Devin Gardner.

Ever since Notre Dame opted out of the series, there has been no shortage of Michigan fans getting mad at the Irish and saying Notre Dame backed out of the rivalry. That is far from the truth. The fact of the matter is once Notre Dame committed to five ACC games a year, they only had room to keep three of their traditional rivalries – Navy, Stanford, and USC. They simply didn’t have room for Michigan.

Michigan fans will boast that they lead the series by 7 games, which they do. But what many fans don’t know is that 8 of Michigan’s wins took place from 1887 until 1908 where the Wolverines won 8 straight to start the series. These wins took place at a time when the Notre Dame was learning how to play football from Michigan, a big disadvantage for the Irish.

To make a long story short, if you take away the first 8 games of the series, most of which took place during the 19th century, Notre Dame would lead the series. Not to say that those games don’t count by any means, I’m just saying that Michigan fans act as if they have dominated the Irish in recent history.

Personally, I’m really excited that this series is back and believe that Jack Swarbrick got the scheduling right. A home and away series for 2018 and 2019 is good for this series. With the Irish having to play the likes of Florida State, Miami, and Clemson quite frequently as part of the ACC agreement, adding Michigan for those 2 years fits in nicely.

In addition to the ACC games and traditional rivalries, the Fighting Irish also have Georgia, Texas A&M, and Ohio State scheduled for the future. So even without the addition of Michigan, Notre Dame will have several primetime games every season.

For the fans who are skeptical that Notre Dame has added teams like Ball State and New Mexico, at least they are division 1 schools. Notre Dame is one of only a handful of schools that has solely played Division 1 opponents. I fully support playing these schools once or twice a season just to get some rest and recovery in (not to take anything away from these schools because anyone can get upset on any given Saturday).

The Michigan game will add another marquee opponent to the Notre Dame Schedule. Jim Harbaugh has Michigan on the rise after just his first season in Ann Arbor. The Wolverines went 10-3 last season and would have beaten Michigan State, a playoff team, if it were not for one of the biggest blunders in college football history by Michigan’s punter. The Wolverines will likely be ranked in the top 15 for the duration of the Harbaugh era and this game will add a quality opponent to the Notre Dame Schedule.

Since Notre Dame is officially an Independent and does not play in a conference championship game, the Irish can use this game as one of their quality opponent for the College Football Playoff résumé. I believe Notre Dame will likely schedule Michigan in the future, probably sometime in the 2020’s for another home and away series.

Notre Dame and Michigan likely will never schedule each other for much longer than either a 2 game or 4 game series, given both schools other scheduling commitments. There is so much that goes in to making games like this happen. I’m excited to see Kelly coach against Harbaugh and perhaps I’ll take a trip to Ann Arbor and hopefully live to tell about it.