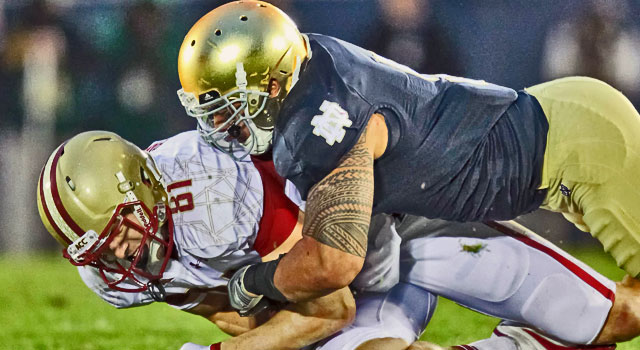 Though natural rivals as the two most prominent Catholic colleges playing Big Time Football,  it took quite a while for the Boston College-Notre Dame series to take root.

Part of the reason may have been that Boston College felt that Notre Dame stole Frank Leahy back to South Bend.

Frank Leahy  had coached at Boston College, spectacularly, in ’39 and ’40, and was a glistening 20-2 for a .909 winning percentage, the greatest in Boston College History.  Nevertheless, when Notre Dame came calling it was a swift and easy decision for Frank Leahy to return to his, and Rockne’s, alma mater.

The Notre Dame – Boston College rivalry is one of several Notre Dame rivalries that features a special trophy for the winner.  The Ireland Trophy was introduced to the rivalry in 1994 by the Notre Dame student government.  A lesser known, but older trophy also exists, however.  The Frank Leahy Memorial Bowl is a large cut crystal bowl handed out to the winner of the game by the Notre Dame Club if Boston at the conclusion of each contest.

Eventually, the series began in in Foxboro in 1975 with Dan Devine leading the Irish to a 17-3 victory.  The game was called the “Holy War” due to both schools Catholic affiliations.  The name stuck. Notre Dame won the first four in the series.

Gerry Faust’s Irish even bested Doug Flutie’s BC team in the ’83 Liberty Bowl.

Some seeds may have been planted, particularly in Tom Coughlin’s intense soul, in the ’92 game.  Notre Dame pounded BC that day by a 52-20 score and a late fake punt call by Notre Dame annoyed the Boston College folk.

On November 13, 1993 the Irish had vanquished the NO. 1 ranked visitors from Florida State in a tense emotional game, 31-24 with a great play by Shawn Wooden stopping a last gasp effort by Heisman Trophy Winner-to-be Charley Ward.  The Irish seemed on a collision course with the National Championship. Other than a 4 point road victory in Ann Arbor, the Irish had dominated all other opponents. That was the good news, but the bad news was that Boston College was coming in on the following Saturday.

Coughlin came seething in, and he didn’t come alone.  He had an NFL-caliber quarterback in Glenn Foley and an NFL caliber Tight End in Pete Mitchell, a mystery that Rick Minter has not yet solved even today.  The letdown trap was set.

Boston College came out roaring and the Irish were expectedly, but fatally, listless. Coughlin carved up Minter’s defense and Foley and Mitchell performed surgery on the underbelly of the Irish secondary. Foley finished the day completing 30 of 48 passes for 315 yards and 4 TDS.  Favorite target Pete Mitchell caught 13 passes for 132 yards.

Lost in the agony of defeat was a stirring Irish comeback, led by Kevin McDougal.  Down by  a margin of 38-17 with just over 11 minutes to go, the Irish exploded offensively and roared back to a 39-38 lead with 69 seconds to go. McDougal was magnificent and had led the talented Irish offense to 22 points in a mere 10 Fourth Quarter minutes.

But Coughlin and Foley had one more bullet to fire and marched down the field, with Mitchell evading Minter’s minions for 2 big catches.  David Gordon punched through a 41 yard field goal as time expired.  Final Score: Boston College 41-Notre Dame 39. The national championship that seemed all but locked up the week before was gone, dreams shattered by Boston College’s Eagles.

Holtz’ regime was never the same after that moment.

A Rivalry Was Born

A rivalry was born that day, and Boston College was now comfortable playing the Irish.  They returned the defeat favor against Holtz again in 1994.

Boston College racked up an 8-4 mark against Notre Dame teams coached by Davie, Willingham and Weis including 6 straight victories from 2001-2007.   The streak by Boston College also included another notable Boston College victory over the Irish.

During Tyrone Willingham’s first season at Notre Dame in 2002, the Irish entered their contest with Boston College undefeated and ranked 4th in the country.  The Eagles shocked the 8-0 bright green clad Fighting Irish that Irish afternoon thanks to a fumble-fest and a 2nd half quarterbacked by Pat Dillingahm following a Carlyle Holiday injury.  The win was Boston College’s first win over a top 5 program since their 1993 upset of the Irish.

Ain’t That a Kick in the Head

Kicking has played a cruel role in this rivalry for the Irish.  On top of Gordon’s ’93 heart breaker, twice in the series a missed extra point has doomed the Irish.  In 1999 a missed Jim Sanson PAT forced the Irish to attempt a two conversion in the 4th they would fail to convert in a two point loss.  In a one point loss in 2004, a missed DJ Fitzpatrick PAT would prove to be the difference.

Brian Kelly’s squads have won three games in a row to make the Irish margin 13-9.  The 2015 Shamrock Series game will be played on November 21st in Fenway Park.

With Boston College now in its 11th year in the Atlantic Coast Conference, the Irish will be seeing the Eagles about every third year.  And the undercurrent will be more Catholic than Atlantic.