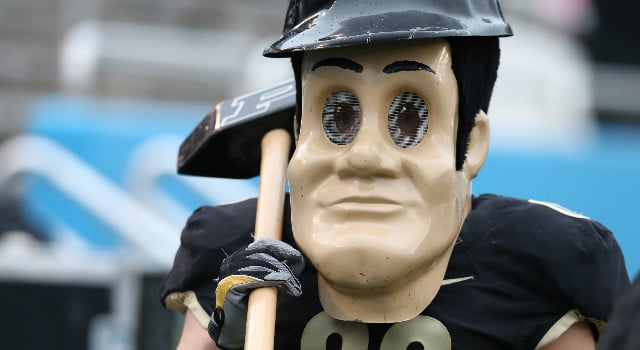 We are back with another installment of Behind Enemy Lines this week with some thoughts on this week’s opponent, the Purdue Boilermakers, from Travis at Hammer and Rails.  It doesn’t sound like the Boilermaker faithful are too hopeful for this weekend.

Hammer and Rails will be posting a Q&A on their site with some answers we provided them as well.  We’ll update with the link once it is live.

1. Purdue lost its leading receiving threat Gabe Holmes in practice on Wednesday. Who do the Boilermakers have to take his place?

It looks like the top replacement will be junior Justin Sinz, who has nice size and has 10 catches for just under 100 yards and a touchdown in his career. Sterling Carter and Patrick Bade (a name familiar because he used to be on the Boiler basketball team) have already played extensively, but as blocking tight ends. They don’t have a catch yet in their career. Redshirt freshman Carlos Carvajal, who was a 4-star commitment in Purdue’s 2012 class, may also play. True freshman Matt Burke is also a possibility.

Holmes has been an interesting player his entire career. Every season was supposed to be a “breakout season” and he “had all the physical tools”, but never quite panned out. He came from Florida power St. Thomas Aquinas and was finally starting to put it all together before this injury.

2. Last year Purdue played Notre Dame very tough in South Bend but went on to have a disappointing season while Notre Dame proved to be pretty good. How was Purdue able to hang with a Notre Dame team that went undefeated a year ago?

Purdue’s defensive line had an excellent day and that allowed the secondary to play well on receivers and it masked the linebackers, which have been a weak spot for about a decade. Robert Marve also had the offense moving well before Danny Hope inexplicably pulled him in favor of Caleb TerBush. For Purdue to have a chance the defensive line needs to have a similarly strong day, and even then it won’t mean much if the offensive line continues to struggle and Rob Henry continues to be inaccurate.

3. Notre Dame fans don’t know a lot about Darrell Hazell right now. What should they know about him and what has he done so far to get Purdue fans excited about the direction of the program?

He said and did all the right things in the off-season to get us excited. He has some solid 2014 players on board including Drue Tranquill, whom Notre Dame recently offered. Tranquill, Denzel Ward, David Blough, and Gelen Robinson are four very promising guys that are already on board to start the 2014 class and they are guys getting national interest. Hazell also preached openness and accountability with the program. He hired some new, better assistants and on paper we all thought it was going well.

Unfortunately, the offense has looked worse than it did at any time last year under Gary Nord, whom Purdue fans learned to despise because of his penchant for bubble screens and multiple quarterbacks. It has made the first few games rough, but I think it also showed that the turnaround from Hope was not going to be immediate. I hope folks are patient, because Hazell, in my mind, is a huge upgrade.

4. Cincinnati scored 42 points on Purdue two weeks ago. Was the Boilermaker defense able to make adjustments last week or was it tough to tell considering their opponent was Indiana State and how to do expect them to defend the Irish offense?

It was tough to tell because they held a shutout for most of three quarters before tiring because the offense was doing so little. The previous week against Cincinnati was similar. Seven of the 42 to Cincinnati came on a pick-6, so that was on the offense. The rest came from them wearing down in the heat of the second half. From the time Purdue tied it at 7-7 Purdue’s offense had five plays before it was 28-7. It went kneel down, three incompletions, and the pick-6. The defense gave up a drive before halftime and immediately after when Cincinnati got the ball to start the second half.

Right now, I think the defense is ahead of the offense and is playing well enough to at least keep us in games if the offense can move the ball, give them rest, and score some points. The offense isn’t doing that, however.

5. Notre Dame’s last trip to West Lafayette for a prime time ABC game turned into a pretty one-sided contest. Do you expect this year’s game to resemble that game or do you see it being more competitive as last year’s contest was?

Yeah, I expect it to be more like 2011 than 2012. Our offensive line is struggling to open holes for the running game and Rob Henry has not been accurate when throwing the football. Against Indiana State Purdue twice had a first and goal situation from the one and got a total of three points because the line got no push. It was also stuffed on a 4th and one near midfield. This was against Indiana State, who probably has less collective talent in its defensive line than Louis Nix alone.

For Purdue to have any chance its offense has to be night and day better than what we have seen so far. Considering that Cincinnati gave up 41 points to a previously punchless Illinois offense and Indiana State gave up 73 to Indiana, there is little to make me think we’re going to suddenly figure this out.

Most Purdue fans view Notre Dame as the top football rival, mostly because Indiana is so historically bad at football. Maybe we’re spoiled because of the recent run of success against the Hoosiers, but beating Indiana is expected. I know we don’t have a great football history, but at least we’re not historically as inept as Purdue.

Another factor that has most Purdue fans not liking Notre Dame is the “reversible jacket” stereotype within the state of Indiana. I am talking about the fans that like both Indiana basketball (for which Purdue fans have far more hatred than Indiana football) and Notre Dame football. We hate those guys.

I like the Notre Dame series because it gives Purdue a “name” non-conference opponent every season that is always going to get national interest. From 1997-2004, which is when I went from high school to attending Purdue before graduating in 2002, the series was pretty exciting with two good teams playing each year. I miss that competitiveness as Notre Dame has improved under Kelly, while Purdue has faded from the wave created by Drew Brees and the Rose Bowl in 2001. Those eight games from 1997-2004 were all competitive and exciting where neither team really had an edge. I’d like to get back to that.