Purdue will be without starting left guard Zack Reckman on Saturday when Notre Dame travels to West Lafayette to square off against the Boilermakers.  The Big 10 suspended Reckman for striking an opponent at the end of Purdue’s loss to North Illinois last week.

Here’s what the Big 10 had to say in their official release announcing the suspension.

The Big Ten determined that Reckman’s actions at the end of the Northern Illinois contest violated Big Ten Conference Agreement 10.01.1.A.1 – “Striking or attempting to strike or otherwise physically abusing an official, opposing coach, spectator or athlete.” The conference office also publicly reprimanded Reckman for his actions.

“We appreciate Purdue’s and head coach Danny Hope’s attention to this issue and feel a one-game suspension is appropriate,” Commissioner James E. Delany said. “The behavior of Zach Reckman at the end of the Northern Illinois game is unacceptable and could have triggered a larger incident.”

This is the second week in a row that the Big 10 has suspended one of its players for striking an opponent.  Michigan was without the services of linebacker Jonas Mouton last week after Mouton was seen puncing Notre Dame starting center after a play during the telecast of the Notre Dame-Michigan game two weeks ago.

You can determine for yourself if the suspension was warranted with the video below.

Purdue coach Randy Hope was asked about Reckman’s actions on Sunday and had this to say.

I’m sure it’s going to be brought up and we’ll address it. I didn’t see anything that happened to that injured player that made me think it was foul play. I don’t think Zach Reckman should’ve jumped in there on that guy at the end of the play but maybe he was hoping the ball would come out. He was trying to find a way to win.”

The problem with that logic is that the Northern Illinois player was down and the play was over as soon as he hit the ground.  At the same time, a lot is racing through a players head at that time so it’s a tough call.

Considering Purdue’s been relying more heavily on their running game this year, this is a big loss for the Boilermakers.  Reckman has started 21 games in his career between both left tackle and left guard.  With Notre Dame blitzing on most downs  (albeit it mostly ineffectively so far this year) this could allow for Notre Dame to get some added pressure on Purdue quarterback Joey Elliot. 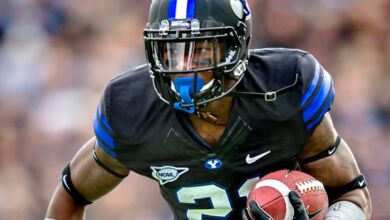