A review of the UHND Road Trip; An emotional football weekend that won’t be duplicated at home in 2008

At the end of our 2007 Boston College trip, Frank, Brian, Kyle and I concluded that next game we would all attend as part of our yearly “guys trip” was going to be Michigan in 2009. Little did we know the elements of nature and event planning would culminate in the perfect storm that descended on South Bend, Indiana, over the Michigan game weekend.

The excitement and emotion that swelled over the course of the Michigan weekend will not be matched at a Notre Dame home game the rest of this season. Sure the home schedule is weak the rest of the way, but consider all of the happenings which made the 2008 Michigan game arguably the best home game to have attended since the 2005 USC game.

Legendary Irish players including such names as Lattner, Casper, Ferguson, Pinkett, Mayes, Rice, Bolcar, Pritchett, Stonebreaker, Ismail and about a dozen other starters from the 1988 National Championship team descended upon the College Football Hall of Fame for eight hours interacting with fans, signing autographs and reliving memories from glory’s past. Their arrival times were staggered throughout the day but almost every player stayed well beyond their commitment to see which familiar face would walk in next. Any die hard Notre Dame football fan would have been paralyzed in awe at seeing the boyish reactions of guys like Pritchett and Stams when they saw and then embraced as the third amigo walked into the room.

Then to sit back and watch members of Notre Dame’s then defensive backfield recalling big plays from the 1988 season. Corny Southall, and George Streeter listened intently as Pat Terrell thought back to the Miami game and the two huge plays he made against Steve Walsh. D’Juan Francisco made sure the guys knew he was the first Irish defender to pick off Walsh that day. And then Sean Penn look-a-like and certainly the most fit forty-something showed up and reminded the guys not to forget his pick-six in Los Angeles. Most everybody agreed Stan Smagala looked like he could still play today.

I had the chance to ask Scott Kowalkowski about the antics Todd Marinovich pulled against him in the 1989 Southern Cal game. His eyes lit up and seemed to thoroughly enjoy talking about the night the Irish beat the Trojans, Marinovich took a cheap shot and Kowalkowski ultimately had the last laugh putting him flat on his back. And then there’s the Rocket. We had the chance to interview the Rocket for the podcast a little over a week prior, but we spent about 20 minutes chatting with him and it is hard to find anybody more enthusiastic in discussing the Irish than the Rocket is. For a fan, it was a special way to spend the even of a rivalry game. But things were just getting started.

I think it is safe to say, over the past 10-15 years, the Notre Dame home pep rally’s haven’t been anything to plan your Friday’s nights in South Bend around.  The initial downfall might have been the decision to move it from the Stepan Center to the JACC, but they may have not had a choice due to fan participation relative to capacity. In any event, more and more people have chosen to spend their vacation time in Chicago, then driving in early Saturday mornings for the game.  Some would rather hit up the local bars like The Linebacker or Corby’s, before ultimately heading to the new Friday night vogue; the Midnight Drummer’s Circle. In fact, I all but protested attending the pep rally with my group.  But I succumbed to peer pressure and I’m glad I did for this night only.  First, it was former Irish captain Ned Bolcar who fired up the crowd and then the team.  He got up and represented the 1988 National Championship team who sat aside the current Irish team.  Ned seemed to get lost in the moment and forgot entirely where he was which made it as surreal as possible.  He seemed to have forgotten there was a crowd there and turned to the team and challenged them to be as great as they could be.  He challenged each player to play for the guy sitting next to them, instead of for self. He was fantastic and you couldn’t help but feel he took personally, what had been a lack of emotion, by recent Irish football teams.   Then there was Lou Holtz.  I won’t try to sum up what Lou said.  You can watch it here:

Speaking of Lou, he joined the fraternity of Irish great football coaches with busts on the ND campus when his statue was unveiled inside the stadium the morning of the game.  It is well deserved and just another not-so-common event that made gameday morning so special.

It had poured nonstop from last Friday night throughout the morning until about 10am.  And then the clouds broke, the temperatures rose to a comfortable 78 degrees and the tailgating began. It couldn’t have been a better start to pregame, allowing fans to cook and enjoy cocktails prior to kickoff and stroll through campus to watch the band march their way from under the Dome to the stadium.

Under a blue-gray, dry September sky, the Irish jumped out to a 21-0 lead within ten minutes to start the game. It was an incredible start an already incredible weekend and you just knew nothing was going to ruin this day…even the weather. With just under five minutes to go in the 2nd quarter, the sprinkles started to fall. And shortly thereafter, those sprinkles turned into a steady and eventually heavy rain that appropriately ended right around the same time as the game. 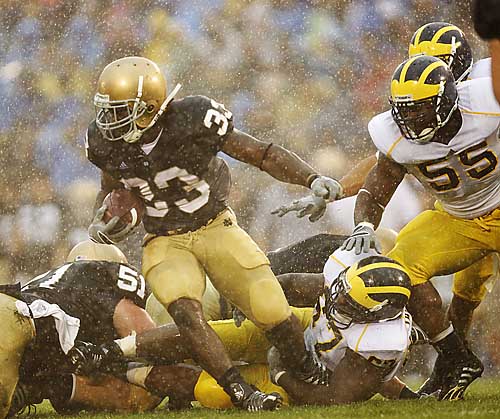 The pouring showers combined with the warm temperatures, created an incredible atmosphere of fun and spirit that put a charge into the already raucous crowd and a fire into a team that was destined to completely dominate an afternoon that was a crescendo of perfection for Notre Dame legends and fans who descended on Notre Dame Stadium that day.  Fred Leahy, son of Frank, told me at dinner he has been to scores of Notre Dame home games.  Included among those were such recent, epic battles against Miami ’88, Florida State ’93, and USC ’05.  And he said Michigan ’08 was the fourth loudest he has ever heard Notre Dame Stadium.

With an uneventful slate of Irish opponents, the chill of fall and early winter an no collection of former Irish greats like the ones we saw the second week of September, fans will be hard pressed to have the type of enthusiasm and like it or not, the Fighting Irish football team will have a hard time matching the emotion they had on September 13, 2008.