On the surface, Notre Dame picked up just a single commitment yesterday from a defensive end, David Abiara, that is rated as a 3-star recruit on some services but is a composite 4-star on 247 Sports.  Under normal circumstances, that would be a nice pickup, but we are not under normal circumstances, and this commitment was much more significant for Notre Dame than just being a single defensive end.  It was huge for Notre Dame’s recruiting efforts for the class of 2021.

First off, let’s talk a little bit about David Abiara.  His 3-star rating on some services is pretty hilarious when you consider that his other significant offers were from Alabama, LSU, Oklahoma, and Texas A&M.  That’s an impressive list of cohorts for someone that is currently only rated as the 42nd best prospect in the state of Texas on Rivals. Anytime you beat LSU and Alabama for a defensive lineman, you have yourself a pretty good prospect.

Abiara’s recruitment moved pretty fast – especially considering the times right now.  He was first offered by the Notre Dame staff at the end of January and quickly made it to campus for a Junior Day.  Luckily he made it when he did since all of the major recruiting events for March have been canceled due to COVID-19.  Apparently Abiara contemplated committing shortly after his visit but waited to make sure it was the right choice for him.  The right time to make that commitment was Friday.

With Abiara on board, Notre Dame has the makings of a tremendous defensive line class.  Abiara joined Gabriel Rubio, a top 100 overall prospect, on Mike Elston‘s defensive line for the class of 2021.

What makes Abiara’s commitment so huge for Notre Dame right now, though, was the much-needed momentum it gives the Irish recruiting efforts.  Notre Dame lost one of its highest-rated recruits last week when Deion Colzie decommitted.  Then on Thursday, one of their top offensive line targets, Landon Tengwall, selected Penn State over Notre Dame.  Tengwall was supposed to be on campus twice this month but ended up choosing Penn State without making either of those visits.

March was supposed to be the month that took Notre Dame’s strong foundation and propelled it towards its aspirational goal of finishing in the top 5 this year.  Instead, its monster recruiting weekend that was supposed to happen last weekend was lost due to the near nationwide lockdown the country is currently under.

Notre Dame, like every other program, has had to pivot to recruiting via video conferencing and FaceTime.  Like every program, there will be trial and error moving to a digital-only recruiting push.  After bumps in the road in the last week, picking up a commitment from someone like Abiara, who will undoubtedly move up in the rankings, was a much-needed boost for Notre Dame’s momentum that had stalled.

There is still a lot of work left for Notre Dame to do, but hopefully, this helps give the class of 2021 recruiting efforts the kind of boost it desperately needed.  Don’t expect Notre Dame to just give up on either Tengwall or Colzie, though.  Colzie has already said that he is still actively considering Notre Dame and considering Tengwall committed without visiting, expect the Irish staff to push hard for a visit, if and when visits can resume.

At a time like this, having a strong corps of commits working to help build the class is vital, and luckily Notre Dame already has that led by their unofficial recruiting coordinator, Blake Fisher.  Fisher even teased the commitment of Abiara before the news became official yesterday.

Fisher has been doing more than his part not only to keep this recruiting class together but to help land more elite prospects.  Fisher was mixing it up with Michigan fans on Twitter just last week standing up for Notre Dame’s recent history of producing elite NFL offensive linemen.  Hopefully, the work he is doing helps the Irish land more recruits like David Abiara even while in-person recruiting isn’t possible.

The Coronavirus and its impact on Notre Dame Football 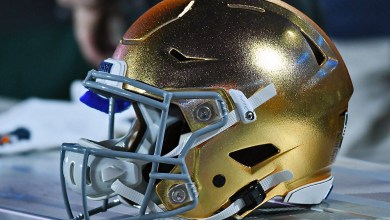 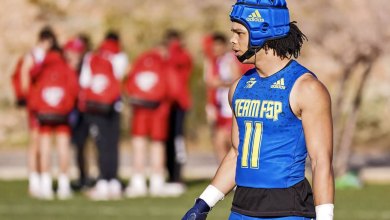 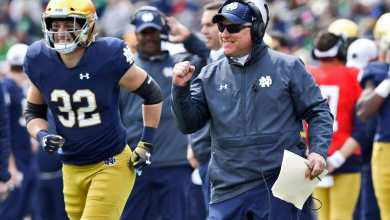