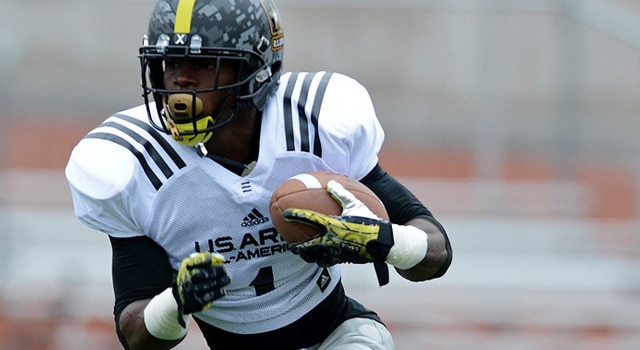 Notre Dame reaped the benefits of a 12-1 season and trip to the national championship with an impressive recruiting class. Following a disappointing class last season the Irish loaded up on elite prospects and filled many positions of need in the 2013 recruiting cycle. With the Irish losing some key pieces from their roster the following players will step up and make an impact as freshman:

A highly coveted talent out of Florida, Greg Bryant is an S.E.C. caliber running back that you don’t often see at Notre Dame. Bryant has all the tools, size, speed, elusiveness; you name it, which will result in him pushing George Atkinson III and Amir Carlisle for the starting running back job from day one. Bryant will only become more of a specimen under the supervision of the Notre Dame strength and conditioning coach and the rest of the Irish staff. Bryant is too talented to keep off the field, so expect the number two ranked running back in the 2013 class to be receiving the bulk of the carries for the Irish by the second quarter of the season.

The crown jewel of the Irish recruiting class, Jaylon Smith, will continue the tradition of great linebackers at Notre Dame. The in-state linebacker is regarded as one of the best prospects in the entire 2013 class. Smith, a consensus five star, will look to step right into the void left by previous elite recruit and Irish legend Manti Te’o. Smith won four state titles in as many years at Bishop Luers and should have little difficulty translating his game to the next level. Smith is a rare combination of speed, toughness, coverage ability, and intelligence, and will likely make his presence felt from the opening game, possibly becoming the best Irish linebacker by mid-season.

Redfield, the highest rated defensive back by Rivals to ever commit to Notre Dame, will likely start from day one for the Irish. The California native excelled at multiple sports in high school due to his combination of athleticism and size. He will fit right into the hole left by Zeke Motta, and has the tools to be an immediate upgrade over the graduating safety. Redfield was formerly committed to USC, but as a member of the Irish he will see more playing time as a freshman than any other member of Notre Dame’s 2013 class.

Notre Dame early enrolee Mike Heuerman will have an opportunity to play early on at the tight-end position with the departure of Tyler Eifert to the NFL. Heuerman, a Florida native, played in an option offense in high school, resulting in a lack of jaw-dropping stats. However, don’t be fooled by the lack of numbers, Heuerman is a prototypical tight-end at 6’4’’, 220 pounds, as well as 4.7 speed. With Eifert’s departure and the struggles of Ben Koyack, Heuerman will battle to receive significant playing time due to his skills as a blocker and receiver.

The second five star from California the Irish signed put an stamp on a brilliant class. The 6’3’’ 310-pound Vanderdoes can play either end or tackle for the Irish and will factor into the defensive line rotation immediately. Vanderdoes, who looked outstanding during Army All-American week, will battle Sheldon Day for the vacant defensive end spot formerly occupied by Kapron Lewis-Moore. Vanderdoes is also a big upgrade over the players on the second unit of Irish defensive lineman, which along with his versatility is the formula for a lot of playing time in order to keep Louis Nix III well rested.