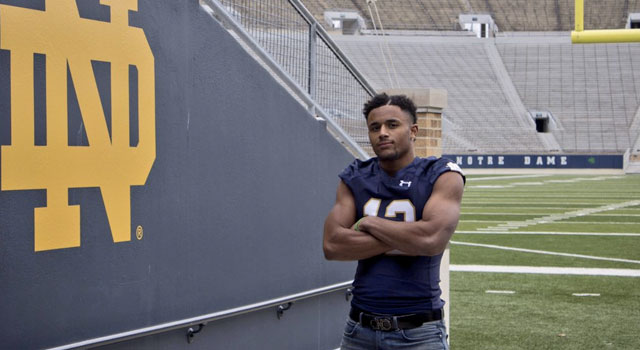 Spring practices have begun for Notre Dame football and in recent years that has meant only one thing: quarterback competition. It seems every year since head coach Brian Kelly’s arrival in December of 2009 a battle at the position has taken place, and even on the rare occasion where a starter seemed straightforward something negative intervened to throw the situation into chaos. In 2010 Dayne Crist tore his ACL against Tulsa, forcing true freshman Tommy Rees into the starting lineup, and in 2013, fresh off a national championship appearance, Tommy Rees was forced to step in again as the starter when Everett Golson was lost for the year due to academic misconduct.

The one thing Notre Dame fans have learned is you can never have enough quarterbacks, and the recent commitment of 3-star quarterback Avery Davis from Cedar Hill, Tex., will provide some future flexibility in what has the potential to be a costly spring for Notre Dame.

No one could have expected a quarterback competition to take place this spring one year ago, but Malik Zaire’s early-season injury paired with DeShone Kizer’s unexpectedly strong play have forced the issue, and it won’t be easy for Brian Kelly to pick a starter. Zaire played historically well to start last season against Texas, completing 86-percent of his passing attempts – good enough to nab the No. 2 spot in school history – as Notre Dame thrashed the Longhorns. But Zaire followed his strong performance with a shaky appearance against Virginia, completing only 7-of-18 passing attempts before suffering an ankle injury that would sideline him for the rest of the season. Likewise, Kizer stunned analysts by upsetting Georgia Tech in his first career start and leading Notre Dame to a 10-win season, but ended the year with an uninspired showing against Ohio State in the Fiesta Bowl.

Given both quarterbacks present a valid case to be the starter, it isn’t unreasonable to believe whoever falls short of winning the position will be upset, and possibly upset enough to seek a transfer, which would leave Notre Dame with three quarterbacks: the starter, Brandon Wimbush and incoming freshman Ian Book. While not an ideal situation, the fear is it could further devolve.

In February Brian Kelly surprisingly revealed his intention to redshirt Brandon Wimbush in 2016 to Bruce Feldman on his “Audible” podcast, which limited Notre Dame’s open quarterback competition to two competitors: Malik Zaire and DeShone Kizer. The announcement concerned some covering Notre Dame football who speculated that not allowing Wimbush to compete could alienate the former 4-star prospect, perhaps enough to make him consider options elsewhere. Such concerns may have been legitimized by the fact Kelly reversed his position a short time after his comments were made.

“As we’ve gotten a chance to assess the situation, we want to give him [Wimbush] a chance to compete as well,” Kelly told the media.

Was Kelly’s 180 initiated by Wimbush expressing frustration with the decision?

“Uh, I’ll pass on that,” Wimbush laughing said when asked about the situation, according to ESPN.

It’s not a secret that Kelly leans toward experience when crafting his two-deep, which would be a huge strike against the inexperienced Wimbush. Should Wimbush lose the competition to both Zaire and Kizer, would he accept the result and believe the selection process was unbiased? And if not, would he consider leaving? Losing one of either Malik Zaire or DeShone Kizer as well as Brandon Wimbush would be nothing short of a disaster for Notre Dame, and is why Avery Davis is a huge pick-up for the program.

While Davis would not enroll until 2017, he would prove an instant reinforcement upon arrival. The talented Texan has drawn comparisons to Wimbush, a fact that should delight Notre Dame fans given some analysts have speculated that Wimbush, from a pure talent perspective, may be the best quarterback on the team. The one area Davis lacks, which is likely responsible for his 3-star status, is his size, which is reported at 5-feet-11 inches. But Notre Dame appears to have snagged an under-the-radar gem from the State of Texas, and it wouldn’t surprise if Davis is upgraded to 4-star status as his profile increases.

Davis posted impressive numbers as a junior in the largest class division in Texas, completing 65-percent of his passing attempts for nearly 2,000 yards and adding 22 touchdown passes compared to only four interceptions. He chipped in nearly another 1,000 yards with his feet while boasting an 8.5 yards per carry average. If his status as a Notre Dame commitment doesn’t raise his profile, a strong performance this fall against national powerhouse Bishop Gorman out of Las Vegas on ESPN will help make his case for 4-star status.

Notre Dame’s current quarterback situation will need to be handled delicately by the coaching staff, but the commitment of Avery Davis should assure Fighting Irish fans that no matter how the competition shakes out, help is on the way.