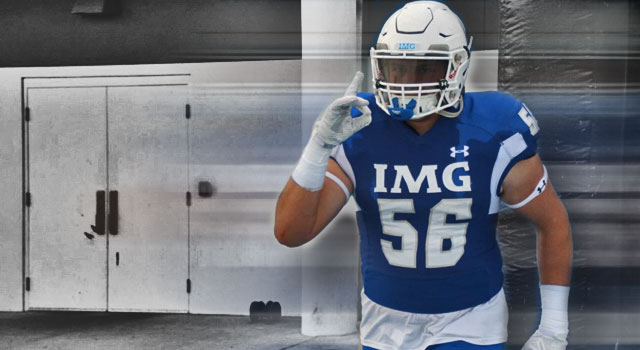 Harry Hiestand isn’t going to jump into any pools to win a recruit over.  He isn’t going to have a sleepover at a recruits house.  And he isn’t going to camp outside their house and prevent a last minute official visit to a rival school.  He is going to tell kids exactly how it is and he is going to lock down a top flight offensive line class.  Every. Damn. Year.  2017 was no exception to the rule.

Two of Harry’s latest additions – Hainsey and Banks – are already on campus and going through the new strength and conditioning program being installed by new S&C coordinator Matt Balis.  Lugg and Gibbons meanwhile will enroll in the summer the rest of the Notre Dame recruits who were not early enrollees.

It should be a surprise to no one that Hiestand and Notre Dame landed one of the nation’s best offensive lines again this year.  It’s been happening almost yearly for the Irish since Hiestand joined the staff.  Last year Notre Dame only inked three offensive linemen but they were all top notch – Tommy Kraemer, Parker Boudreaux, and Liam Eichenberg.  Look for all three to be challenging for roles in the Notre Dame two deep this year.

Two years ago Notre Dame landed Trevor Ruhland, Tristen Hoge, and Jerry Tillery.  Tillery of course switched over to defense, however, and has stuck on defense ever since.   Three years ago it was Quenton Nelson, Alex Bars, Sam Mustipher, and Jimmy Byrne.

This year’s haul ranks right up there with that 2014 class that produced three starters on the 2016 Fighting Irish.  Hainsey and Banks are both early enrollees who were consensus 4-star recruits from the beginning.  Hainsey committed to the Irish in the spring early in the process, but Banks was a December addition that came as a surprise to many in the recruiting community.  Notre Dame wasn’t considered the favorite before Banks’s commitment, but that didn’t stop Hiestand.

Lugg was a participant in the US Army All-American Bowl who came into the game as a 3-star prospect on some sites.  He wasn’t after and is now considered to be one of the highest rated recruits in the Notre Dame class of 2017.   Lugg checks in at #121 in the 247Sports Composite rankings and #86 overall in their own rankings.   Hainsey edges him out at #81 overall as the 5th rated guard in the entire country.

The least heralded of the bunch was the first to join the class of 2017 at any position.  Dillan Gibbons was Notre Dame’s first commitment in this recruiting cycle and never did much of the camp circuit.  As a result, Gibbons was a 3-star recruit on the services.  In the 247Sports Composite rankings, however, Gibbons ranks 378th overall which isn’t far from 4-star territory at all.  Before his early commitment, Gibbons held offers from Ohio State and Michigan State.

With the 2017 class, Notre Dame has now landed seven offensive linemen in the last two cycles and all but Gibbons were 4-star prospects on at least some services.  That is building depth with top notch talent in the offensive trenches.  That is reloading, not rebuilding.  If only Notre Dame could recruit on the defensive line like that, but I digress.

Don’t expect to see Notre Dame’s recruiting on the offensive line slow down at all while Harry Hiestand is in charge of the unit.  He’s been a juggernaut on the recruiting trail over the last few years and while the 2016 unit had it’s ups and downs, it’s poised for a big year in 2017 with all of the talent and experience coming back.