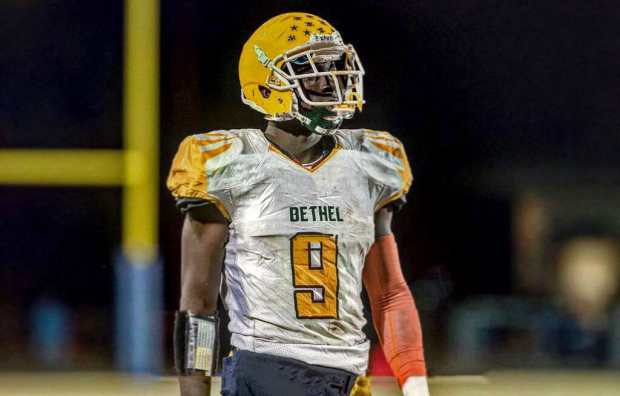 Notre Dame head coach Brian Kelly pulled off some theatrics at his Signing Day Press Conference Wednesday.  Kelly’s phone rang as he addressed the media and the head man left the room.  It was Jeremiah Owusu-Koramoah calling to say that he was signed, sealed and deliver to Notre Dame!

Notre Dame was locked into an epic recruiting battle with Michigan State heading into Signing Day for Owusu after the outside linebacker/safety recruit decommited from Virginia.  In the end the Irish were able to pull off the come from behind victory to lock him up.

At 6-2, 200 lbs, Owusu is listed as a linebacker on every recruiting service but his fit in Mike Elko’s new Notre Dame defense could be either the hybrid safety position known as the ROVER or at the BUCK linebacker position.

Wherever he ends up, Notre Dame is getting a pure athlete who is still scratching the surface of his potential.

It was unclear where Owusu was headed right up until he made the call to Brian Kelly during his press conference, but his addition gives Notre Dame two new members of the class of 2017 today joining Hawaiian defensive lineman Myron Tagovailoa-Amosa who signed earlier this afternoon.  Notre Dame had hopes to add a third early this morning but cornerback Russ Yeast held his commitment to Louisville.

As we were writing this post, Notre Dame added that third recruit when defensive end Kofi Wardlow sent in his LOI to Notre Dame to give Notre Dame 21 recruits in this year’s class and one of the better closes the Irish have seen in years.