Signing Day has been more of a time cringe than a time to celebrate for Notre Dame fans over the last few years.  Last year the Irish missed on Ben Davis, Caleb Kelly, and (eventually) Demetrius Robertson while only landing one new recruit – Jonathan Jones.  This year it looked like it would be more of the same when Russ Yeast stuck with Louisville early this morning.  Throughout the day, however, Notre Dame not only avoided any last minute defections, they also bolstered what was looking like a thin defensive class with three talented defensive recruits.

Late last night there was a bit of a buzz that Notre Dame might just pull off flipping Yeast from Louisville.  The Indiana native and Under Armour All-American should have been offered by Notre Dame a long, long time ago.  Had he been, there would have been no drama.  He’d have been one of the first to send in his LOI this morning.

Instead, Notre Dame tried to hold on to commitments from Elijah Hicks and Paulson Adebo even though the Hicks commitment was on thin ice long before he eventually decommitted and when it was known that Adebo coveted a Stanford offer.  But I digress, today was a good day so we’ll dive into some of the misses in this class at a later time.

Notre Dame started the day with 18 commitments with four prospects left on the board after Jalen Harris decided to stick with Arizona last night.  The Yeast news wasn’t a good way to start the day but things would soon start to change in Notre Dame favor.

Around lunch time on the east coast, big defensive tackle Myron Tagovailoa-Amosa was waking up in Hawaii and getting ready to send in his LOI to Notre Dame.  Tagovailoa, whom we are nicknaming Lord Myron, gives Notre Dame a fleet footed, big bodied lineman for the interior line with pass rush ability. Tagovailoa is listed as a defensive end on recruiting services but Brian Polian said today they envision him to be a 300-320 DT who is light on his feet.

This left Notre Dame at 19 commitments in this years class.

When Brian Kelly started his annual Signing Day Presser, his class still stood at 19 commitments.  Was Kelly telling us all that no one more recruits were coming?  Would they offer an addendum afterwards like they did in 2013 with Eddie Vanderdoes?  Neither.

About a half hour into Kelly’s remarks, his phone rang.  Kelly said he had to take the call and left the room (NCAA rules and all about being in front of the media).  The WatchND cameras followed (which as Jack Nolan explained is fully within the rules) as Jeremiah Owusu called Kelly to announce he was part of the class.  Kelly came back to the media room smiling announcing the Irish had just added a ROVER linebacker for Mike Elko’s defense.

Ok, now we were cooking.  A defensive tackle and a rangy ROVER who new linebackers coach Clark Lea and Elko coveted for the Irish defense were in the fold.  Notre Dame was up to 20 prospects, but something was still missing.

The lone missing component at this point was a pass rusher.  Well, that and a corner but given the haul in the secondary last year the lack of a corner isn’t terrible. It’s more annoying since there was an All-American in Notre Dame’s back yard who would have jumped at an early offer.  Still, a pass rusher is what Notre Dame needed after being left at the alter last night for Harris’s State U.

A few minutes after the call from Owusu, Kelly was interrupted again to be given confirmation of another LOI.  This time it was Washington DC area pass rusher Kofi Wardlow.  Interestingly enough, the official press release from Notre Dame listed Wardlow at just 210 lbs.  Most recruiting sites had him in the 230-240 range leading some (myself included) to wonder aloud if he would eventually grow into more of a strong-side defensive end.

At 210 lbs, however, Wardlow will need some filling out just to be a weak-side pass rusher.  Wardlow is a still raw and has only played football for two years so this will take a team effort from Mike Elston and Mike Elko here to develop the promising but raw prospect.

Not only did Notre Dame bat .750 today, they also avoided any Signing Day drama and last minute defections.  There were no Greg Little or Deontay Greenberry sistuations as all 18 verbally committed prospects signed their LOI’s as expected – most of them before before 10:00 AM ET.

Considering 4-8, the coaching turnover, the decommitments, and the fact that this class was just 15 members at the beginning of the day last Wednesday, the last week may well be the most successful for Brian Kelly on the recruiting trail in his time at Notre Dame.   Would it have been nice if some of these late additions were 5-star talents?  Of course it would.  Notre Dame found prospects who fit their system though and were able to salvage a class that was teetering on the edge for weeks.

All things considered, today was one of the best Signing Days for Notre Dame football in a long, long time. 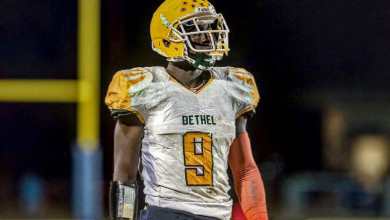