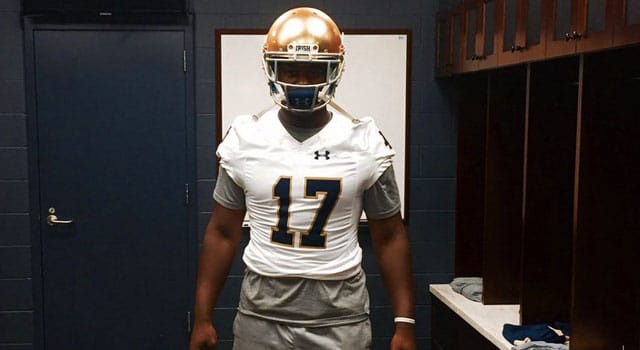 Notre Dame picked up two new members of the class of 2018 on Sunday in the form of Jersey City twins Jayson Ademilola and Justin Ademilola.  The St. Peter’s Prep stars earned offers from Notre Dame on a visit this weekend and it didn’t take long for the 4-star duo to decide they wanted to act on those offers immediately.

Both Justin and Jayson Ademilola are ranked as 4-star, Top 247 recruits by 247 Sports already as they enter their junior years at St. Peter’s Prep.  Prior to committing to Notre Dame the pair held impressive offer lists including scholarships from Auburn, Michigan, Georgia, Penn State, and Michigan State.

While the twins are both 4-star athletes and stand 6’3″ tall, they have earned their stars at different positions.  Justin Ademilola is ranked as 247’s #10 outside linebacker (#170 overall) while Jayson is ranked as the #17 defensive tackle (#178 overall).  Their weights should give you an idea why they play different positions.  Justin is listed at 225 lbs currently while Jayson has bulked up to 285.

The two could still end up lining up next to each other on the collegiate level, however, as some feel that Justin could grow into a defensive end by the time he maxes out.

The Ademilola twins are the first defensive recruits in the class of 2018 at this very early stage joining quarterback Phil Jurkovec and running back Markese Stepp.  All four recruits are currently listed as 4-star prospects by 247.

Jayson and Justin Ademilola play for the same high school that produced current Notre Dame sophomore quarterback Brandon Wimbush.  If all goes as planned this year and Wimbush is able to get the red-shirt year he couldn’t a year ago, they could end up playing with in 2018 when they enroll at Notre Dame.

Today’s commitments come on the heels of an impressive haul coming out of last weekend’s Irish Invasion when the Irish added three commitments to the class of 2017 – WR Jordan Pouncey, DE Jonathon MacCollister, CB Paulson Adebo – and one 2018 commitment – Stepp.

Signing Day 2018 is a long, long ways away, but Notre Dame fans should be really excited about today’s addition and how the class of 2018 is already shaping up with four 4-star recruits before July.