Monday was quite the productive day on the recruiting trail for Notre Dame – especially for the second week of February.  After picking up a commitment from 4-star CB Kalon Gervin this morning, Notre Dame’s class of 2018 picked up even more steam Monday night when 4-star safety Derrik Allen pledged to the Irish as well.   Less than two weeks from National Signing Day 2017 and Notre Dame added two 4-star top 100 caliber defensive backs.

This is a big time pickup for Notre Dame.   Derrik Allen (6’1″, 205 lbs) is a consensus 4-star prospect across the board and is the composite #52 overall prospect in the county by 247 and is ranked 36th overall by Rivals.  Before Allen committed to Notre Dame on Monday, he held offers from Alabama, Auburn, Clemson, Florida, Florida State, Georgia, Ohio State, Oklahoma, and Penn State among many more FBS Power 5 conference programs.

Want to get a better idea of how good Derrik Allen is?  Blue &amp; Gold Illustrated’s Bryan Driskell – who recently did one heck of a great Q&amp;A with UHND where he gave some great insight into the Notre Dame recruiting machine – said the following on Twitter Monday night.

I'll have a full film evaluation up in a bit, but @DsmoothAllen gets the highest grade for a ND safety that I've given since Harrison Smith.

Just a friendly reminder, Harrison Smith was a first round draft pick in the 2012 NFL Draft by the Minnesota Vikings and has been named to back to back Pro Bowls in 2015 and 2016.

Yes, Notre Dame went into Georgia, on the heels of a 4-8 campaign, and lured away a Top 50 caliber safety away from SEC powers Georgia, Alabama, and Auburn.  That is huge for this coaching staff.  There’s no other way to say it.  Hats off here to both defensive backs coach Todd Lyght and defensive coordinator Mike Elko.   Allen had an offer from Wake Forest as well and had been recruited by Elko before he took over at Notre Dame.

Elko, as he did earlier in the day when Gervin committed, tweeted out his excitement over the latest addition to the class of 2018.

Man them Irish D-Boys are on a roll. Coming from all over the country to join something special. #IrishBouND18 🍀🍀

The Notre Dame staff went up against the two undisputed big dogs in recruiting currently – Alabama and Ohio State – and won a recruiting battle for an elite safety.  Urban Meyer himself offer Allen his scholarship and Kerry Coombs – a former Brian Kelly assistant coach at Cincinnati – was Allen’s recruiter for the Buckeyes.

With the addition of Allen, Notre Dame now has two 4-star, top 100 caliber recruits in the secondary at the early stages of this recruiting class. Notre Dame also has another composite 4-star recruit giving them six out of eight commitments.  Six of those eight commitments are also on the defensive side of the ball which should be music to Notre Dame’s fans’ ears.

A little less than two weeks ago the Notre Dame secondary in the class of 2017 was marked more by the lack of replacements for Paulson Adebo and Elijah Hicks leaving Todd Lyght to be the most somber Notre Dame assistant on the day.   Fast forward to today and Lyght must be one of the happiest assistants on Brian Kelly’s newly reshuffled coaching staff.  As one of three Notre Dame alum on the staff, it’s almost impossible not to be happy for Lyght today.

Now, while this is all amazing news.  We all saw last year that early recruiting commitments do not ensure signatures a year down the road so expect the Notre Dame staff to continue to be all over both Allen and Kalon Gervin.  Urban Meyer and his staff don’t like to lose recruiting battles – especially to Notre Dame – and they will not go away quietly for a top 100 safety.

Notre Dame would do itself a lot of favors if the Irish secondary under Lyght and Elko’s guidance came out and backed up the optimism that is currently surrounding the Notre Dame defense. 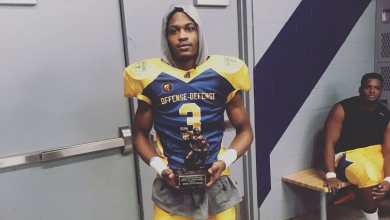 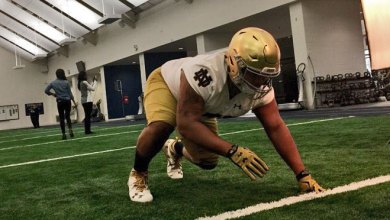 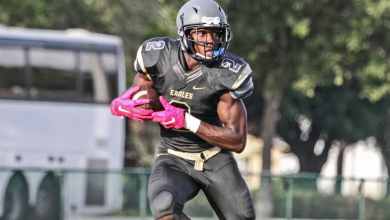 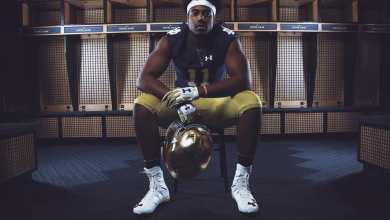