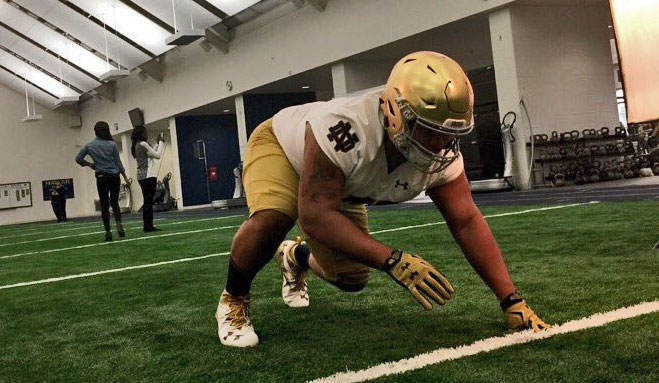 Every year I like to pick a handful of my favorite players who aren’t as highly touted, but I think have bright futures. This is my third signing day, and my best pick in this column is Julian Love, who signed in 2016, my first season writing for UHND. He’s heading into his third season as a starter, will likely be a captain, and pre-season All-American.

In short, he worked out. Hopefully some of these players follow the same career path.

Lenzy is actually borderline because he’s a pretty solid four star player, and I usually reserve this space for three star players. But, his composite national ranking is #215 per 247, and I think we will look back after his first two seasons thinking this guy was an elite talent that people didn’t talk enough about. He’s most known for his speed, but his transformation into a physical runner with the ball in his hands shifts the way he should be thought about as a prospect. At first, he was more like a less explosive Will Fuller. Now, he is more like a more explosive and bigger Golden Tate (although, he may not have the magical hands Tate possessed).

People mention Lenzy’s speed for good reason, he’s the defending Oregon state 100 and 200 meter champion. Don’t be surprised to see him return the opening kickoff against Michigan to open the 2018 season.

Fanfare around Tremble and his recruitment was muted in 2017 because of a knee injury that ended his season in his first game of the year. Obviously, when you enter the year somewhat under the radar, and then lose your season altogether, it’s hard to generate a lot of buzz. But, Tremble is a tremendous athlete with plenty of pedigree and supposedly ran a faster 40 time in one of the preseason combines than that of five star receiver Amon-Ra St. Brown, who was at the same event. Maybe that’s a little bit of shenanigans, but his athleticism is apparent when you watch him play. Could he be the type of tight end that Alize Mack has struggled to become? I think he can.

He’s big at 6-4, he’s physical, very comfortable catching the ball, and really good with the ball in his hands. Plus, he’s a guy who held offers from Michigan, Georgia, Auburn, and UCLA. Per 247, he’s the 20th ranked tight end in the 2018 class. That seems not entirely high enough.

I’ll just put it like this, I like him better than any of the guys Notre Dame signed along the defensive line last season, and they signed some pretty good players in 2017. He’s got great burst off the line, it’s actually striking, and he’s pretty agile for a guy of his size (6-1, 295). He earned a place at The Opening Finals in Oregon in the pre-season and he acquitted himself well against some of the best offensive linemen in the country.

He’s listed as the 566th player in the country, but he’s actually risen about 300 spots since the end of junior season when he was considered a two star player and not really on anyone’s radar. He also received offers from Florida State, Michigan, Penn State, and Wisconsin. Not really a 500th player in the country type of offer list.

At first glance, Flemister was an obvious candidate for a panic offer after Notre Dame lost two running backs following the Citrus Bowl. It’d be very easy to dismiss him as just a body. I have to say, after watching his film, I really don’t think that’s the case. I’m not a professional talent evaluator or anything, but I’m just really impressed with his game. He has a natural feel for the holes opening up, is shifty, has good burst, and was incredibly productive as a high school runner. He’s obviously not going to have incredible measurables or a great 40 time, if he did he wouldn’t be a low three star player. But, another running back from Georgia who wasn’t a physical marvel who worked out pretty well at Notre Dame was Darius Walker. I’m not saying he’ll be Walker, but he’s not a throwaway either. I think we’re all going to be pleasantly surprised.