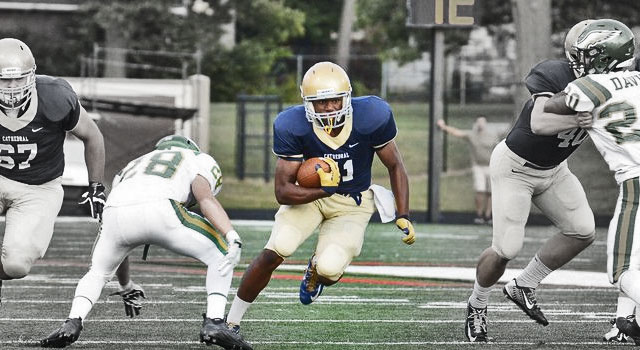 After getting some potentially great news earlier this weekend when Houston Griffith decommitted from Florida State shortly after an in-home visit from Notre Dame DB coach Todd Lyght, the Irish got some bad news on Saturday.  Markese Stepp, the first commitment in the class of 2018 and one of the most prolific recruit recruiters Notre Dame has had, has decided to decommit from Notre Dame and reconsider his options.

Stepp announced his decision over Twitter on Saturday night.

BREAKING: Four-star RB Markese Stepp has de-committed from #NotreDame. This was a mutual decision between both parties and I’m told there is nothing but love and respect between both staff and player in this situation. https://t.co/0DtLRX0QFC #IrishIllustrated pic.twitter.com/YNqaEgH8G4

We had heard some rumblings about Stepp’s commitment back in the summer, but given how much Stepp was still recruiting for Notre Dame, it seemed very out of left field and surprising. We won’t add to any speculation here, but given Loy’s tweet it doesn’t sound like this news was all that surprising to the Notre Dame coaching staff given it was a mutual decision.  Another tweet from Irish Sports Daily’s Matt Freeman with quotes from Stepp reflect the feelings of a kid who is pretty broken up about the development.

2018 four-star RB Markese Stepp on telling the #NotreDame commits of his plans to decommit.

"I told them before I announced my decommitment. It was a sad moment and I'll miss them. It hit us all real hard. They wished me the best of luck and I wished them all best of luck." pic.twitter.com/ndNxhgRq9o

Again, adding all of that up and reading between all of the tea leaves doesn’t seen too difficult, but let’s leave any of that speculation.  Still, it leaves Notre Dame at 18 commitments just two months out from National Signing Day.

The good news here is that Notre Dame should still be pretty set at the running back position in the fall regardless of what Josh Adams ends up deciding with regards to the NFL.  Even if Adams were to leave early, Notre Dame will have five scholarship running backs on the roster next fall.

Now, add in Josh Adams into that group – I know, I know probably a pipe dream – and the running back stable still looks pretty well stocked for 2018.  So stocked in fact, that it will be interesting to see if Notre Dame really pushes for another running back in the class or if they will use the scholarship elsewhere such as either of the lines.

Notre Dame could still use another offensive lineman, two more corners, another defensive end, and another linebacker.  Notre Dame looks like they very well could land a second tight end in Tommy Tremble as well.  Finishing the class out strong in those areas would be more beneficial long term than trying to recruit a number of backs cold at this point.