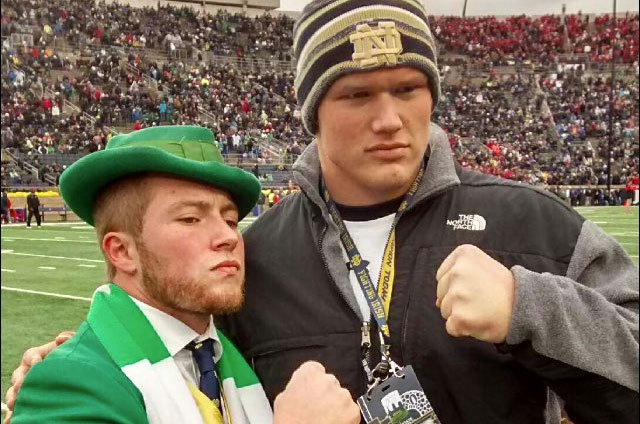 Notre Dame continued its recruiting run on Monday with another big time commitment along the offensive line.  Zeke Correll – a 4-star OL from Cincinnati, Ohio – committed to the Irish on Monday over a host of elite programs including his home state Ohio State Buckeyes.

Notre Dame’s latest commitment, its 14th for the class of 2019 that now sits in the 247Sports Top 5, selected the Irish over offers from the aforementioned Buckeyes as well as Alabama, Clemson, Michigan, Michigan State, Oregon, Penn State, Stanford and a host of other big time programs.

I AM 100% COMMITTED TO NOTRE DAME! #GoIrish ☘️🏉 pic.twitter.com/izGZowQMIj

247Sports ranks Correll as the #9 offensive guard in the country and the #5 prospect in the state of Ohio.  While he rated as a guard, his future at Notre Dame is at center according to what he told 247Sports.

“I’m going to play center and I will early enroll, so if I early enroll and come in at center, Sam Mustipher will be gone next year — he’s a true senior,” Correll said. “So if I come in and work hard at it, I have the potential chance to get in so I’m looking forward to learning the position.”

Notre Dame has not fared well in the Buckeye state in recent years with Urban Meyer owning his backyard.  The last recruit from Ohio with an offer from both Notre Dame and Ohio State to select the Irish was Liam Eichenberg in 2015 according to @andrewwinn.

Zeke Correll's commitment represents a rarity. He is the first Ohioan since Liam Eichenberg (4/19/15) to pick ND while holding an OSU offer.

This was yet another big time win for the Irish and new offensive line coach Jeff Quinn for more than just beating out Urbie for a change.  Correll joins an offensive line class that is shaping up to be one of the best of the Brian Kelly era.  And that is saying something considering the offensive linemen that Kelly and Harry Hiestand produced in their time together.

Notre Dame now has four commitments along the offensive line with Correll joining Quinn Carroll, John Olmstead, and Andrew Kristofic.  All but Kristofic are currently composite 4-star recruits and Kristofic is considered to have perhaps the most upside of the group.

Even with four top offensive linemen committed for 2019, Notre Dame will be looking to add a 5th lineman to round out the group and Saleem Wormley – another 4-star prospect – is right at the top of their wish list.  Wormley is currently ranked as the #103 overall prospect in the country according to Rivals.com.

Notre Dame has been on a bit of a recruiting run here in the last few weeks with 4-star LB Osita Ekwonu and 3-star LB Jack Kiser committing to Notre Dame last week and punter Jay Bramblett and 4-star DE NaNa Osafo-Mensah both committing within the last month.