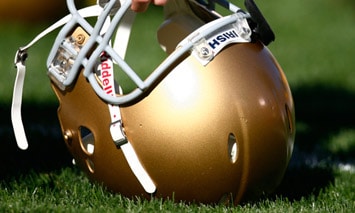 Neal is a dynamic playmaker who can play on either side of the ball at wide receiver on offense or at cornerback on the defensive side of the ball.  With the defections of wide receiver Deontay Greenberry and cornerback Ronald Darby in the final weeks and days leading up to Signing Day, Neal’s versatility is a very welcomed addition to this year’s recruiting class which is now ranked #9 in the country according to ESPN.

Early indications are that Neal will start on the offensive side of the ball where his playmaking ability can be utilized while adding another dimension to the return game as a punt returner.  In the open field, Neal has excellent speed and acceleration and can be a factor running the ball out of the backfield in a Percy Harvin type of role – the kind of role the Notre Dame staff has said they hope Theo Riddick to fill in 2012.

Neal is very similar to fellow Irish incoming freshman Kervaire Russell in that both players can run the ball out of the backfield and be playmakers out of the slot receiver position.  Russell has more natural running back skills and is a more physical player, but Neal has more top end speed and will challenge fellow wide receiver Chris Brown for the fastest player in this year’s class.

As a senior, Neal’s versatility was on full display while he wracked up 1,317 yards on the ground with another 1,113 through the air as a receiver all while reaching the end zone 35 times as he led Chaparral High School to the state championship.  In the state title game, Neal was at his best with 220 yards on the ground with another 107 receiving while scoring three times.

Neal’s commitment is the latest I can remember Notre Dame receiving since we’ve been running UHND and even today his commitment took a little longer than expected.  Neal was set to announce his decision and sign his letter of intent this morning at a press conference televised by Fox Sports West at his grade school before some last minute indecision caused him and his family to delay his announcement a few more hours.  After returning to the school, Neal eventually signed his letter of intent for Notre Dame albeit without any cameras rolling.

With Neal, Notre Dame salvaged a wide receiver class that took a major blow on Signing Day when Greenberry switched his verbal commitment to Houston at the 11th hour after being committed to Notre Dame since the spring.  Neal joins Russell, Brown, and Justin Ferguson in this year’s class giving the Irish a talented, deep, versatile, and FAST group of incoming receivers.