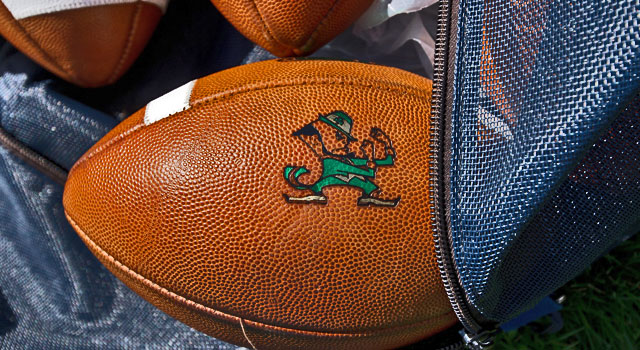 Notre Dame picked up another big commitment for the class of 2016 on Monday when 4-star cornerback Donte Vaughn selected the Irish on his birthday.  In this case, he gave the Irish coaching staff the gift of yet another top notch member of the secondary in the class of 2016.

Prior to selecting Notre Dame on Monday, Vaughn picked up scholarship offers from the likes of Auburn, LSU, Ole Miss, Miami, Texas A&M, and Wisconsin.

Vauggn brings a lot of versatility with him to South Bend with his 6’2″, 195 lbs frame.  Rivals listed him as a 4-star safety while 247 Sports ranks him as a 4-star corner.  With his height he could give the Irish a corner with great size or he could potentially play at safety depending on how the rest of the secondary shakes out.

Vaughn visited Notre Dame several times but was most recently on campus for Notre Dame’s 38-3 beating of Texas to open the 2015 season.  Now that he is committed to the Irish, Vaughn has said he plans on canceling all other visits and has no plans on taking any other recruiting visits.

Notre Dame had a huge need in the secondary this year and so far they have done an excellent job filling that need.  Vaughn is the 5th defensive back in the class joining Spencer Perry, Julian Love, DJ Morgan, and Jalen Elliot.  Vaughn joins Morgan as a 4-star recruit in the defensive backfield but brings with him the highest overall rating of the group.

Vaughn is a rare commitment from Tennessee for the Irish and according to Rivals, he would be the first player to sign with the Irish from Memphis since Rivals has been around.  Notre Dame has recently had another safety from Tennessee though.  Former standout safety and current Minnesota Viking Harrison Smith came to Notre Dame from Knoxville in the class of 2007.  Irish fans certainly wouldn’t mind if Vaughn ended up having a similar impact as the former 1st round NFL Draft pick had for the Irish.