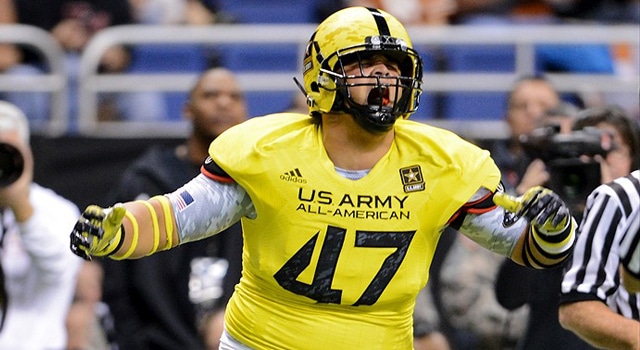 Vanderdoes’s signing comes after quite a bit of signing day drama after the first signing day press release from Notre Dame inadvertently had Vanderdoes listed as a signee even though he had yet to fax in his LOI.  At the time Vanderdoes had yet to send in his fax or announce where he was headed.  At the end of the day though, Vanderdoes selected Notre Dame over USC, UCLA, and Alabama rounding out a recruiting class that clearly ranks as the best class brought in by the current coaching staff since their arrival to Notre Dame just over three years ago.

Vanderdoes had been committed to USC for a while, but opened up his recruitment at the end of 2012 with UCLA, Alabama, and Notre Dame his main suitors along with USC.  After visiting all of his finalists over the last month, Vanderdoes ended up picking the Irish to bolster an already strong class for Notre Dame.

With Vanderdoes in the fold, the Irish class includes 5-star prospects at each level of the defense with Vanderdoes up front, Jaylon Smith at linebacker, and Max Redfield in the defensive backfield at safety.   Combine that haul with one of the best offensive line classes in the country and commitments from two of the best running backs in the country and this is a banner year for the Irish and head coach Brian Kelly.

Vanderdoes is an elite defensive lineman who was an absolute force in the US Army All American Bowl.  His scouting video shows just how dominating of a force he is up front and should give every Notre Dame fan a lot of optimism about the future at defensive line for the Irish.

Notre Dame got involved in recruiting Vanderdoes heavily quickly after he decommitted from USC and hosted the 5-star talent in late January on the same weekend that Durham Smythe was on campus and committed to the Irish.   He joins Jacob Matuska and Isaac Rochell along the defensive line for Notre Dame and rounds out what could be the best defensive class in the last 20 years for Notre Dame given the depth and quality at each level.

Notre Dame ended up signing 10 defensive recruits today to go along with an offensive class consisting of 14 prospects.  For recruiting capsules and video of each use the links below.