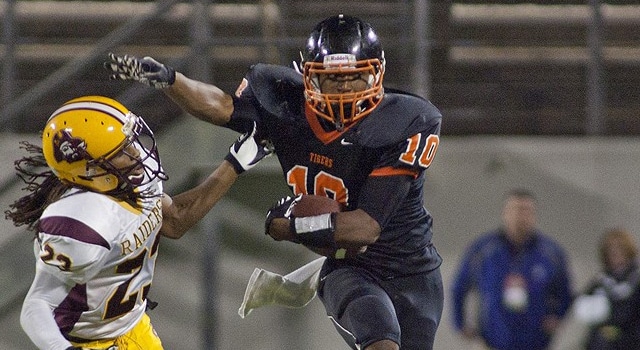 Tarean Folston, a 4-star running back, remains committed to Notre Dame after a weekend visit to Auburn, but it doesn’t sound like Notre Dame is quite out of the woods just yet based on comments the speedy tailback made to AL.com.

“We’ll see how everything pans out,” he said.

He said he doesn’t plan to visit any other schools. As for now, “I’m just going about my business in high school, and when that day comes I’ll make that decision.”

While Folston’s comments aren’t as positive as they could have been, he did leave Auburn without committing and that bodes well for Notre Dame.  In an ideal world, Folston would have returned home and said that he was reaffirming his commitment to Notre Dame.    Getting him off of the Auburn campus without a commitment to the Tigers though is a positive development.

Auburn was not one of Folston’s finalists when he committed to Notre Dame earlier this month at the Under Armour All American Bowl because the Tigers had gone through a coaching change.  With Guz Malzahn in place as the head coach though, they have gotten back into the mix in part because of their new running backs coach, Rich Bisaccia.

Bisaccia has a reputation as a great recruiter and was Folston’s primary recruiter at Florida State.

Notre Dame definitely has a battle on its hands to re-secure Folston before Signing Day, but luckily with only a few spots remaining, Kelly should be able to put Alford on a full court press to keep Folston in the fold.

It  didn’t look like there would be a whole lot to monitor over the final weeks before Signing Day earlier this month, but with a host of recruits set to visit to Notre Dame this weekend – we’ll have a post on this later – and Folston looking at Auburn, it looks like things won’t be so quiet after all.

And, honestly, when are things ever quiet for Notre Dame fans?