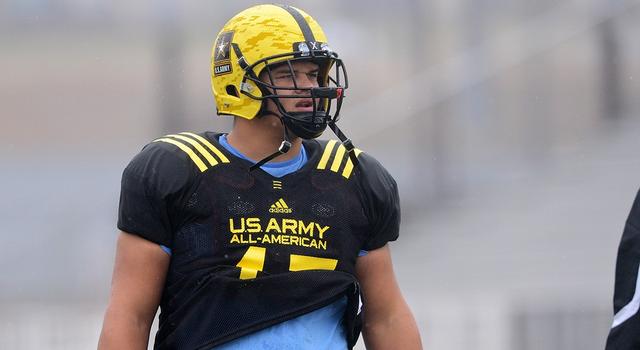 The memories of 2012’s National Signing Day, where recruits officially sign the dotted line to their school of choice, are ones Notre Dame fans would like to forget. A recruiting class with ample promise, wilted in the final moments. To make matters worse, Notre Dame’s recruiting stumble in 2012 happened over the course of several months rather than several days or weeks, festering like a scab all throughout the spring.

Rivals 4-star defensive back Ronald Darby, one of the fastest players in the nation, had been a Notre Dame commitment for nine months before switching his pledge and ultimately signing with Florida State. Four-star wide receiver Deontary Greenberry stunned the Fighting Irish by signing with Houston on National Signing Day when he had given no indication of leaving, creating a national storyline that resulted in Notre Dame landing on the receiving end of many jokes. Notre Dame couldn’t even find sanctuary from defections already on the roster. Rivals 4-star defensive back Tee Shepard was an early enrollee and had already signed his letter of intent to Notre Dame, though his stay at the university lasted only a few short months before transferring out. And, of course, the departure of former 4-star defensive end and freshman All-American, Aaron Lynch, in April ended a four month recruiting stumble for the Fighting Irish.

What a difference a year makes. After an undefeated regular season and a BCS National Championship appearance, Notre Dame is poised to sign the second best class in the nation, with a very real chance of displacing Florida for the recruiting title. With only a few spots left in the class of 2013, Notre Dame will host some of the best players left on the board on Saturday, January 25th, and could end this recruiting cycle with arguably the best recruiting class in modern school history. Here’s a closer look at the visiting recruits that could push Notre Dame over the top.

Eddie Vanderdoes is the type of player that defines a program, with offers from nearly every school in the nation. Signing Vanderdoes, along with current Rivals 5-star linebacker commit Jaylon Smith, would potentially cement Notre Dame with an elite defense for years to come.

Vanderdoes recently earned a 5th star after a dominating performance at the U.S. Army All-American game in San Antonio. Recruiting analyst Rob Cassidy said Vanderdoes “absolutely [bullied] some of the best offensive linemen in the country” and was “rarely contained.”

Vanderdoes, a former USC commitment, has narrowed his school choices down to Alabama, Notre Dame, UCLA, USC and Washington. Landing his signature will be a tough task, but Notre Dame should be in the thick of things until the very end.

Fitts is a former USC commitment who re-opened his recruitment when USC asked Fitts to delay his enrollment until the summer despite the fact he was originally an early enrollee (meaning he’d officially enroll as a USC student in January). The problem? USC asked Fitts for the delay mere days before he was set to enroll, a blow considering he already finished his accelerated program to graduate high school early. The new circumstances were enough for Fitts to consider other options, though USC, his childhood favorite, is still very much in the mix.

Fitts is considered a likely candidate to stay on the West Coast but his interest in Notre Dame is strong enough to travel to South Bend in the heart of a wintery January. Adding more depth to the defensive line is a priority, and adding Fitts would help.

A trend is emerging: LaRue is also a former USC commitment, making three total former USC commits visiting South Bend this weekend. The hope is all three players continue to bond, but this time in Notre Dame’s backyard.

LaRue finished a recruiting visit last weekend at Texas A&M and has offers from programs such as USC, Oklahoma and Michigan. While some wonder whether ND would sign another wide receiver considering four have already committed, the possibility has increased given the recent broken femur of Notre Dame wide receiver commitment Torii Hunter Jr. (and yes, the name should ring a bell if you’re a fan of MLB).

UPDATE: LaRue tweeted on Thursday that he will not be making the trip to Notre Dame and is no longer considering the Irish.

Hollins is intrigued by the prospect of playing alongside 5-star ND linebacker commit Jaylon Smith. How intrigued? Intrigued enough to visit even while committed to UCLA. The consensus seems to be that Hollins will stay committed to the Bruins, but actions speak louder than words. Hollins visited Utah on January 11th, will visit Notre Dame this weekend and has another visit scheduled at Arizona State on February 1st.

Signing Hollins would be a major coup for the Irish defense and add to an already stellar linebacker class.

A one-time Texas commitment, what Smythe lacks in star rankings he more than compensates with scholarship offers. With programs such as Texas, Stanford, Michigan, and Notre Dame in heavy pursuit, you have to wonder why Smythe only weighs in at 3-stars. Regardless, with troubles surfacing for Mack Brown in Austin, Smythe has opened up his recruitment.

Though Smythe grew up a Notre Dame fan and reached out to Kelly’s staff after his decommitment from Texas, this is far from a slam-dunk for the Irish. Smythe truly enjoyed his visit to Stanford on January 11th, and the Cardinal have done an excellent job in paving a route to the NFL for tight ends in recent years. Still, the fact Smythe changed his visit date to coincide with the other high profile recruits coming in to South Bend this Saturday is a good sign.

While Notre Dame has limited space in its current class, landing two of the recruits visiting this weekend would give the Irish one of its best classes in modern history, and a great way to forget the horrible signing day from 2012.