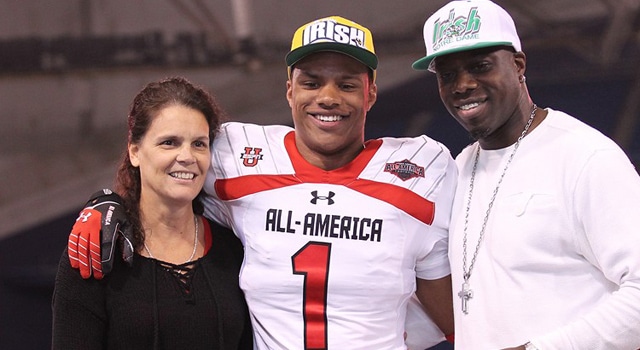 Max Redfield (1) of Mission Viejo (Calif.) poses with his family after he announced that he will be attending Notre Dame during the 2013 Under Armour All-American Game at Tropicana Field in St. Petersburg, FL (Photo - Mark LoMoglio/Icon SMI)

The Notre Dame recruiting train continued to move forward on Friday with the commitment of 5-star safety Max Redfield on Friday.  Redfield, a one-time USC commitment, selected Notre Dame over USC and Ohio State during the Under Armour All American game on ESPN.

“Next year I will be joining the #1 team in the country and attending the University of Notre Dame,” Redfield said on live TV just minutes ago.

Redfield has been considered a Notre Dame lean for a while now and made things official on Friday during the live telecast of the Under Armour game.

Notre Dame has added an impact safety with the commitment of Redfield – a safety who has the ability to play very early in his Notre Dame career with a little bit of work in the weight room this off-season.  The Irish will lose Zeke Motta to graduation this off-season which will open up at least one safety position.  Look for Redfield to challenge Nicky Baratti for that vacated starting position opposite Matthias Farely who very likely will have his starting position locked down heading into 2013 after a very strong first season as a starter.

Redfield originally committed to USC early on in the recruiting process, but opened up his recruitment after really enjoying a visit to Notre Dame in October for the Stanford game.  Following that visit Redfield told the South Bend Tribune that the atmosphere at the game really stood out.

“I’m still committed to USC, but I have a lot to think about,” Redfield said. “All around it was a great trip. It’s going to be a tough decision.”

“During the game and after the game it was pretty moving to see how into the game the crowd was and how dedicated they were to the team and cheering them,” Redfield said. “Through all the pouring rain they were still there for hours and hours. Throughout the game they had the same excitement.”

For a while it looked like Redfield was a lock for Notre Dame following that visit, but an early December visit to USC reminded the elite safety why he originally committed to the Trojans and pitted the two long-time rivals in a dead heat for his services.  Since that visit though, Notre Dame gained more and more momentum with Redfield as USC’s recruiting class continued to take a few hits following the Trojans disappointing season and poor showing in the Sun Bowl.

Redfield’s commitment is the second big time pickup for the Irish this week.  Earlier this week, elite running back recruit Tarean Folston committed to Notre Dame during the Skills Competition at the Under Armour game.

With Redfield in the mix, Notre Dame has landed four defensive backs in this years class as he joins corner backs Cole Luke, Rashad Kinlaw, and Devin Butler for a very strong secondary a year after Notre Dame lost several defensive back prospects down the stretch.  Notre Dame has a number of safeties on the current roster, but none bring the skillset that Redfield adds to the defensive backfield.

You have to go back to Gerome Sapp back in 1998 to find a safety prospect that is rated as highly as Redfield to enroll at Notre Dame.   Redfield’s commitment also gives Notre Dame three 5-star commitments (based on Rivals’ rankings) for the firs time since 2008 when Notre Dame landed Dayne Crist, Michael Floyd, and Kyle Rudolph.  Notre Dame’s other two 5-star commitments this year are running back Greg Bryant and linebacker Jaylon Smith.

Notre Dame has very few spots remaining in this year’s class – the exact number actually still being a little up in the air – with several highly rated recruits still strongly considering Notre Dame.  Most notably, Eddie Vanderdoes, a 4-star defensive line prospect who like Redfield was a one time USC commitment.  Vanderdoes is set to visit Notre Dame later this month and will be playing in tomorrow’s Army All-American Bowl.