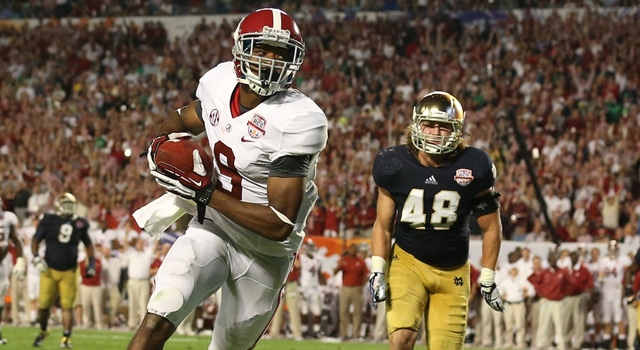 Despite a 12-0 regular season in 2012, the talent gap between Notre Dame and the SEC powers was on display during the BCS National Championship last January. (Photo: Matthew Emmons / USA TODAY Sports)

There’s an elephant in the room within the college football landscape, and it extends far beyond the one residing in Tuscaloosa. The Southeastern Conference is the best conference in the nation, and it’s not even close. Seven consecutive national championships and four Heisman Trophy winners in six years – that’s a lot of hardware. The question isn’t whether the SEC is truly the best – though some conferences prefer denial by continually arguing the point – but what can be done about it?

How the SEC dominance began

Before the SEC’s dominance can be addressed, what has led to the conference’s success has to be understood. While enough variables exist to extend far beyond the reaches of this article, one factor is easily observable: America’s top high school talent has shifted to the South. Within the Rivals 250 for the Class of 2014, 152 of the top 250 high school athletes in America hails from the South, a total of 61%. In its simplified form, why is the SEC the best conference in America? Because the best talent is in the South.

If the best talent is in the South, the next logical move would be to fight for a foothold in growing hotspots such as Georgia and Virginia. Notre Dame athletic director Jack Swarbrick has done an excellent job aligning the Fighting Irish with the Atlantic Coast Conference, which will give ND a stronger Southern presence, with matches against the likes of Florida State, Miami, Clemson and Virginia Tech. Notre Dame head coach Brian Kelly has also done his part, making Southern recruiting a high priority since taking control in South Bend. To better gauge the effectiveness of Notre Dame’s Southern strategy, it helps to make comparisons to other programs similarly situated.

What strategy has the Big Ten implemented to account for the SEC’s dominance? Have Big Ten schools made it a priority to heavily recruit SEC territory? The most reasonable way to answer this question is to examine Big Ten programs with national prestige, ones with a rich enough history and tradition to offer Southern recruits a reason to move far away from home: Michigan and Ohio State. Ohio State will be particularly interesting to watch moving forward given Ohio State head coach, Urban Meyer, has deep ties to the South after his championship runs at the University of Florida. However, considering Meyer has only been in Columbus for one season, he hasn’t accumulated enough recruiting classes to get an accurate indication of his recruiting priorities.

Where is Notre Dame and Big Ten Talent coming from?

Michigan head coach Brady Hoke has recruited extremely well since arriving in Ann Arbor, hauling in top ten classes. But where are the recruits coming from? Do any hail below the Mason-Dixon line?

The results clearly indicate Notre Dame has placed a premium on bringing in talent from SEC territory while Michigan and the Big Ten have not, with the Fighting Irish signing nearly four times as many Southern recruits as the Wolverines. The criticism from Big Ten country can already be heard loud and clear: “So what? What difference does it make if Notre Dame has more Southern talent?”

The Big Ten is more than capable of winning large quantities of games with the talent they do recruit. While not hailing from the South, Michigan landed the #2 recruit in the country in Jabrill Peppers (New Jersey), and the Wolverines are in the mix for the #1 overall recruit, Da’Shawn Hand (Maryland). And Michigan and Notre Dame have fought over recruits from the Midwest, such as tight end Nic Weishar (Notre Dame) and Michael Ferns (Michigan). So does it matter if the Big Ten refreshes its roster with talent from the Midwest rather than the South? Not for now, at least.

Ohio State illustrated last season a Big Ten team can compete at the highest levels of college football. However, it cannot be ignored that the Southern swing in college football is more than a fad – it’s the future. Recruiting from the Midwest only is not a viable long-term strategy – it’s a hand with diminishing returns by the year. Notre Dame defeated Michigan on its way to an unblemished regular season largely due to outstanding defensive line play courtesy of Kapron Lewis-Moore (Texas), Louis Nix (Florida) and Stephon Tuitt (Georgia).

The 21st Century of college football belongs to the South, and based on recruiting evidence, Notre Dame is light years ahead of its Northern brethren in stemming the SEC tide.