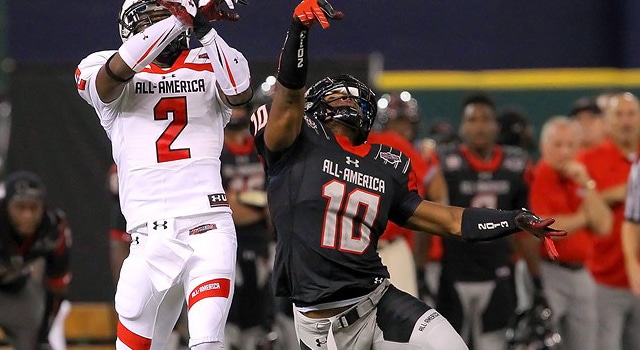 The Notre Dame recruiting train was steaming full speed ahead a few weeks ago, but since Notre Dame picked up Max Redfield and Tarean Folston in the days before the Discover BCS Championship, the Irish lost 4 star linebacker Alex Anzalone and now the Irish appear to be on thin ice with Folston.  The 4-star running back will visit Auburn this weekend despite committing to Notre Dame just two weeks ago.

When Tarean Folston committed to Notre Dame, he gave the Irish one of the best one-two punches at running back in a single recruiting class in a long time along with fellow running back commitment Greg Bryant.

What has changed in the two weeks since Folston’s commitment is unclear.  While Brian Kelly flirted with the NFL after interviewing with the Philadelphia Eagles, he reasserted his own commitment to Notre Dame and reports have surfaced that a contract extension is in the works for Kelly and Notre Dame.

Was Kelly’s flirtation with the NFL enough ammunition for the Auburn coaches to get the speedy running back to visit this weekend?  Possibly, although we won’t know for sure until Folston returns from his trip and talks with reporters.

Auburn was high on Folston’s list before they fired Gene Chizik following another disappointing season.  With Gus Malzahn in place now though, his new staff appears to have at the very least convinced Folston to give them a second look.

Notre Dame’s class is still a consensus top 5 class right now, but if Auburn is able to lure Folston away, it would be a huge blow to Notre Dame and they could very drop out of the top 5.  More importantly though, Folston is the homerun threat in this class at running back and would be the most athletic tailback on the Irish roster in 2013.

It’s not time to panic just yet, but anytime a recruit takes a visit somewhere else this late in the recruiting process it’s not a good sign.  Kelly and his staff still have plenty of time to pull Folston back into the fold, and the good news is, with only a couple spots left in this class, they can put the full-court press to keep Folston as part of the “Irish Mob”.