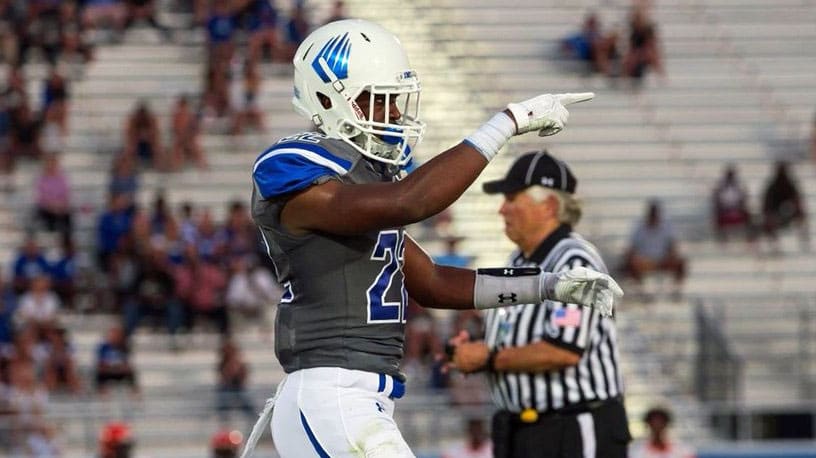 Every now and then it’s nice to give the current state of recruiting the once-over and get an idea of where things stand. Understandably, there is a little more intrigue this cycle following such a poor showing in 2016. As you would expect, doomsday scenarios were regularly bandied about, with the turmoil surrounding the program thought to be a deterrent to high profile recruits. Fortunately, that has not shown itself to be the case.

However, as one would expect with spring practice coming to a close and the summer fast approaching, things have slowed down some as far as commitments go. The Notre Dame class currently stands at 11 verbal commitments, down one from it’s highest point (we will get that in a second). At this point, Notre Dame holds the 5th spot in the national recruiting rankings according to 247 sports, down two spots from the high water mark of third. Let’s take a look at what has transpired and where things are likely to go as the famed Irish Invasion summer camp gets going on June 10th.

As referenced above, Notre Dame lost their sole cornerback commit, Kalon Gervin, on May 6th. The four star recruit had committed earlier in the spring from the recruiting enigma that is Cass Tech in Michigan. He cited a lack of attention shown to him on behalf of the Irish staff among his reasons for opening up his recruitment, and I only reference that as a matter of fact. There are conflicting reports on that but, frankly, it really doesn’t make much difference; he decided Notre Dame wasn’t for him and everyone moves on.

This leaves Notre Dame in a very precarious position going forward at the cornerback position. The Irish very famously did not sign in a corner in the 2017 recruiting class and, naturally, that was said to be a big emphasis on the part of the Notre Dame coaches heading into 2018. So far, though, they have struck out.

Their best chance at a high profile commit joining the class at corner is IMG Academies Houston Griffith. Ranked the #53 player nationally on 247, Griffith is formally out of Chicago, and moved to the prestigious football school in Florida so finish his high school career.

I don’t want to go on and call him a must get, but he is kind of a must get for this class. He’s big, he’s physical, he plays against big time competition, and he was a local player. He’s been to Notre Dame’s campus over a half dozen times, so the interest is definitely there. It’s said to be between Notre Dame and Ohio State and the staff has to find a way to emerge with his signature.

As for Notre Dame’s current situation at the position, it’s pretty unbelievable they would be behind the eight ball at this point in the game when it was known how critical it was to sign multiple corners in this class. A long way to go, but not encouraging.

Moving on to some optimistic news, there are a couple of names to watch out for who might be on their way to pulling the trigger in favor of our favorite school.

Wide receiver Kevin Austin has been heavily linked to Notre Dame for a while, and announced via twitter that a commitment would be forthcoming shortly. He included a final four of Notre Dame, Duke, Miami, and Tennessee. The four star out of Broward County has a little Jeff Samardzija to his game, perhaps with a little more burst. He’d give the Irish three quality receivers, joining Braden Lenzy and Micah Jones, with a slew of high profile targets still on the board for the staff. It’s said Notre Dame could go as high as five players at this position, especially if one of those five is Amon-Rah St. Brown out of California.

Another player to watch out for is defensive tackle Ja’Mion Franklin, who like Austin, has carried strong vibes with the Notre Dame program for a little while now. Currently a three star player, he was invited to The Opening Finals in Oregon later in the summer, which is likely to produce some sort of ratings bump for him and add to his national profile. He’s 6’1 315 pounds and shows impressive burst and quickness inside for a player of his size. A lot of people on the Notre Dame beat have been bullish about his ability and it seems others are beginning to notice that as well.

Gaining a quality defensive tackle is always a good thing at Notre Dame and paired with a player like Thomas Booker and/or PJ Mustipher would be a coup for the program.

Losing Out On Dallas Gant

The outside linebacker from Toledo, Ohio is set to announce this week but things didn’t work out for Notre Dame. He was a huge focus for the staff on his visit for the spring game, as well as a priority for the committed recruits in attendance.

Pulling a high profile athlete out of Ohio is always difficult, especially when Urban Meyer puts on the full court press. That was case here. Even prior to committing there were rumors Gant is a silent commit to the Buckeyes. It’s unfortunate, because Notre Dame really went after him hard, the silver lining is Notre Dame is in a pretty good position at outside linebacker in general. It looks like it’ll be on to the next for the staff.

Players To Feel Good About

This is just what it sounds like, I don’t know if they’ll land these guys, or when they’ll commit, but I’ve got good feelings. I also have no inside info, so you can take this for whatever it’s worth.

Players To Be Worried About

I’m not saying they won’t get these guys or have no chance, I just don’t feel that great about it right now.