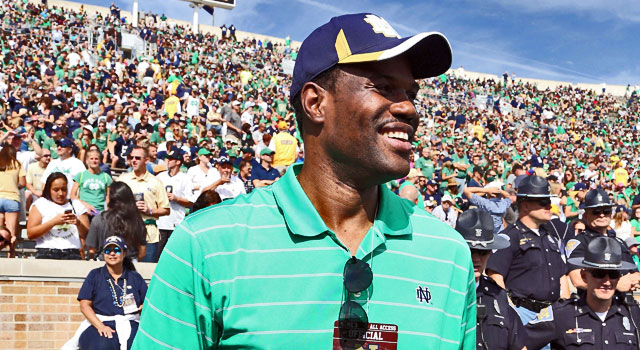 The NCAA made some headlines last week by banning “satellite camps” like the ones Michigan held this past off-season.  While that ruling has no real impact on Notre Dame since they have never conducted satellite camps, the NCAA’s decision to allow an institution to cover the costs for two parents/legal guardians to accompany prospective recruits on official visits could end up being a huge boost for Notre Dame on the recruiting.

Prior to the NCAA’s decision, parents and legal guardians of prospective recruits had to pay their own transportation and food costs if they wanted to accompany their child on a recruiting visit as the NCAA only allowed the institution to pay for the recruit.  This isn’t a huge deal if you are say Florida or Florida State and a lot of your recruits hail from the sunshine state or if your are Texas or Texas A&M and have throngs of the nation’s elite prep players in your own backyard allowing a parent or legal guardian to drive to drive to campus for an official visit.

In the case of a school like Notre Dame that has a truly national recruiting footprint, that rule has impacted their ability to get parents or guardians on campus.  Some might scoff at that notion and state that costs shouldn’t impact a parent’s decision to travel for an official visit, but when you consider many elite prep athletes use all five of their official visits, those costs can add up quickly and not all American families can afford to pay for flights for both parents for up to five visits.

As 247 Sports points out, one only has to look back to this past recruiting cycle to find a situation where an elite recruit ended up visiting Notre Dame alone.  That recruit was Demetrius Robertson and his recruitment is still not over.

Notre Dame is a unique place and many times has a profound impact on people the first time they step foot on campus.  Having a  parent on campus with a recruit also ensures that the family gets the whole picture of what Notre Dame has to offer not just from an athletic standpoint but also an academic point of view.  Now add into that the opportunity to rub elbows with David Robinson who has been at every Notre Dame game since his son Corey enrolled at Notre Dame and there are even more benefits to ensuring a recruits parents are on campus with them.

I’m reminded of the classic story of the recruitment of Kory Minor some twenty years ago when his mother walked around a snow covered campus with him and told the kid from California shivering in the cold that she could buy him a jacket but she can’t buy him what Notre Dame could give him.  Minor committed to Lou Holtz on his visit shortly after and was a four year starter for the Irish.

From a strategic standpoint, this rule can give Notre Dame some insight into where they stand with a recruit and his family as well.  IE is a family giving Notre Dame lip service regarding their interest in Notre Dame when declining to join their sons on visits?  In the past there was a very simple excuse to not join them.  That is no longer the case.

This new rule goes into effect August 1 which means that it will completely impact the entire class of 2017 as official visits are not allowed to take place until the first day of classes during the recruit’s senior season.

Will this new rule lead a few more parents to pull their son aside as they walk campus and gaze at the Golden Dome glistening in the fall sunlight or after lighting a candle at the grotto?  Who knows.  I’m an eternal optimist and a hopeless romantic so I would like to think it will.  At a bare minimum though it should ensure that Notre Dame – and other programs that recruit nationally – are on a level playing field in terms of having an opportunity to win over parents/guardians while on their campuses.