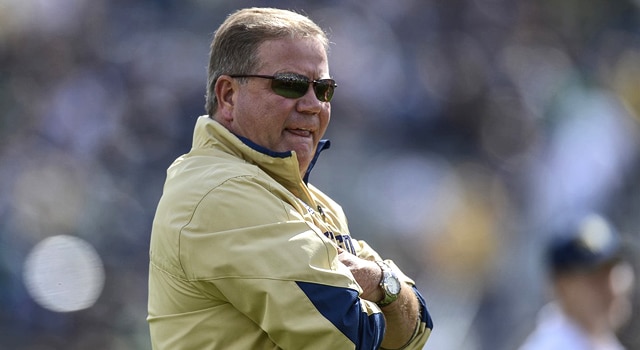 What a difference a week makes.  On June 4th Notre Dame received a significant setback to its recruiting class for 2015 when Blake Barnett, a Rivals 4-star quarterback and the Fighting Irish’s highest rated commitment, de-committed to better explore programs like Oregon and Alabama.  Barnett had been the crown jewel and face of Notre Dame’s class, leaving Irish head coach Brian Kelly searching for a recruiting identity with Notre Dame’s first ever Irish Invasion camp – an invitation only recruiting event – a mere two weeks away.  Fast-forward one week and five new recruits have pledged to play their Saturdays in South Bend, completely transforming Notre Dame’s recruiting momentum.

Notre Dame received three commitments along the defensive line, all hailing from the Midwest.  Indianapolis native Brandon Tiassum got the ball rolling with a commitment on June 8th, followed by Rivals 3-star Micah Dew-Treadway.  The defensive line haul was capped off with a recruiting coup when Cincinnati Moeller’s – the same high school that produced former Notre Dame quarterback Andrew Hendrix – Elijah Taylor offered his commitment to play in South Bend.  Taylor’s commitment was the culmination of a drawn out battle between Ohio State and Notre Dame, and marked an important recruiting victory at a position of need.

The string of commitments continued with cornerback Nick Coleman from Kettering, Ohio, hailing from the same high school that produced current Notre Dame quarterback Malik Zaire.  Coleman, though boasting a lower profile offer sheet, possesses the kind of athleticism that has the Notre Dame coaching staff excited about his potential.  And the potential in Notre Dame’s secondary grew even stronger this past weekend when Rivals 4-star cornerback and one time Michigan commitment, Shaun Crawford, finally offered his pledge to the University of Notre Dame after weeks of speculation.

Despite the streak of verbal commitments, arguably the biggest coup for Notre Dame’s recruiting fortunes involves a number of the nation’s very best recruits that have visited campus recently.

On June 7th Notre Dame once again hosted Cincinnati-based linebacker Justin Hilliard on a visit with his mother.  Hilliard, a Rivals 4-star linebacker, is listed as one of Rivals’ coveted Top 100 high school athletes and possesses elite offers from the likes of Alabama, Florida State and Ohio State.  Like recent Irish commitment Elijah Taylor, Notre Dame has battled Ohio State fiercely for Hilliard’s services, and all indications point toward a photo finish for the blue chip Ohio prospect.

Texas running back Soso Jamabo visited South Bend a short two days after Hilliard’s departure.  Jamabo, ranked 45th overall nationally by Rivals, has an offer from nearly every powerhouse program in America, and simply getting Jamabo on campus represents a monumental recruiting victory.  The Lone Star State standout represents the kind of talent that rarely escapes the recruiting grasp of Texas’s in-state powers, and all indications are that Notre Dame has placed itself in an excellent position to possibly gain Jamabo’s signature down the road.

June 10th marked Rivals 4-star wide receiver Equanimeous St. Brown’s turn to visit.  The California native’s recruitment – with offers from the likes of LSU and USC – has an extra element of intrigue considering he is the friend and high school teammate of Travis Waller, one of Notre Dame’s top quarterback targets.  The potential to grab both California prospects in one swoop is legitimate.  Standing at a lengthy 6’5”, St Brown would offer the kind of size at the wide receiver position that Notre Dame has lacked since Michael Floyd’s 1st round NFL departure to the Arizona Cardinals in 2012.

Finally, and most surprisingly, Rivals 5-star running back Jacques Patrick made an unexpected mid-week visit to campus on June 11th.  The #18 ranked player in the nation, with offers from Alabama, Texas and USC, made the impromptu trek from Detroit to South Bend while visiting family in Michigan.  Patrick’s unofficial visit impressed him enough that he intends to return to Notre Dame roughly one week later to attend Notre Dame’s Irish Invasion, beginning on June 20th.

Scott Janssen is a blogger for the Huffington Post and has authored several nationally-featured articles, including an appearance on MSNBC as a sports contributor.  He talks football 24 hours a day, much to the chagrin of his fiancée.  Scott can be reached at scottjanssenhp@gmail.com.