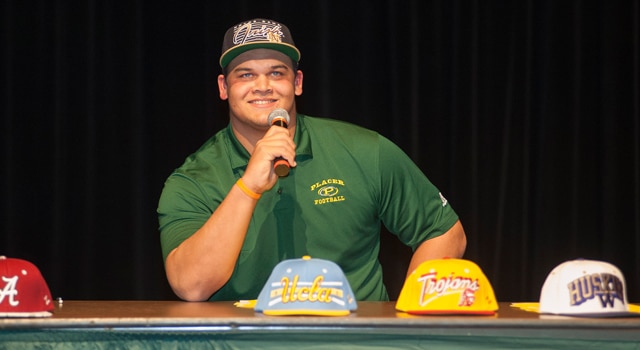 National Signing Day 2016 is a less than a week away and it promises to be an eventful one for the Notre Dame football team and its coaches. The Fighting Irish will be sweating out the decisions of five prospects, including five-star players Demetris Robertson, Ben Davis, and Caleb Kelly. Should the Irish secure their commitments, and add on players such as Jonathan Jones or Jordan Fuller, they’d surely be looking at a top five recruiting class and one of the deepest classes in recent memory.

Of course, NSD decisions bring about some trepidation for Notre Dame fans as they’ve been burned time and time again by the wrong hat being pulled in front of millions on TV. As we approach some major decisions that will shape the future of Notre Dame football, it seemed appropriate to rehash some of the highs and lows of NSD to bury the hatchet, exercise some demons, and approach this year with a positive attitude.

The feelings/fear that Notre Dame fans feel regarding NSD originate with Lorenzo Booker’s decision on television in 2002 and CJ Leak’s signing day bombshell in 1999. To rehash for those who may have forgotten, Booker was Reggie Bush before there was Reggie Bush and Leak was a star quarterback and the prize of Bob Davie’s third recruiting class . Booker was the hottest running back commodity in high school football out of Oxnard, California and his high school highlights were something to behold. Somewhat incredibly, Notre Dame and their new head coach Tyrone Willingham, were one of the favorites to land the five star talent and #1 rated player in the nation. It’s good to remember that Willingham had just been hired, hadn’t coached a game at Notre Dame, and hadn’t yet shown his proclivity to golf during recruiting cycles. Hope sprung eternal.

Booker was a NSD decision, covered live by ESPN, and by all accounts in the days leading up to the announcement, he was Notre Dame’s guy. There were rumors of a silent commit made to Willingham the night before, and that fact made the rounds on Notre Dame message boards. His announcement was surely going to propel Willingham to greatness and Notre Dame’s return to glory would commence. Instead, he stood in front of the nation, put on a Florida State hat, and traumatized fans forever.

Leak had been rumored to be Notre Dame’s guy for months by the national pundits; he visited on a number of occasions, had a great relationship with the coaching staff and his signature seemed to be more of a formality. It was to be a great pickup for Davie; Leak had offers from every national program in the country and he seemed to be a good replacement for Jarious Jackson and could have battled Arnaz Battle–pun intended–for the starting spot. In a stunning announcement that left his high school coach “flabbergasted”, Leak signed with Wake Forest, a school that he had never visited. Great, just great.

The “Are You Worried? Because I’m Worried” Signing Day Flips-  The Little’s and Deontay Greenbury

In 2007 Notre Dame was recruiting a pair of Little’s to join their football class–Greg, a receiver out of Durham, North Carolina, and Chris, an offensive tackle from Jeffersonville, Georgia. Greg Little was an extremely sought after recruit who figured to perfectly compliment the best quarterback prospect since John Elway–Jimmy Clausen–and he announced his commitment to the Irish and head coach Charlie Weis in November of 2006. As signing day rolled around and letters of intent came in, Greg Little’s name was conspicuously absent. Turns out, North Carolina and Butch Davis had (allegedly) secretly secured Little’s commitment and he was all set to sign with North Carolina, which he ended up doing. Notre Dame was left to sign Duval Kamara and a small receiver out of Tennessee, who couldn’t run routes, in Golden Tate. Tate ended up breaking all kinds of Notre Dame receiving records while winning the Biletnikoff Award for the nation’s best receiver in 2009. Funny how recruiting works sometimes.

Chris Little’s story, no relation to Greg, is similar in that he had previously announced his commitment to Notre Dame, after decommitting from Florida State, only to ultimately end up with Georgia on signing day.

To round out the signing day commitment flips, we have the Deontay Greenberry saga of 2012. This has to go down as the most surprising flip of anyone in recent memory due to the fact that his cousin, Tee Shepard, was also committed to Notre Dame and was in fact already on campus as an early enrollee recruit. It’s one thing to lose a recruit on national signing day out of the blue, but Greenberry didn’t just spurn Notre Dame, he cast his lot with the University of Houston instead. To be fair, it wasn’t completely out of the blue as Greenberry had taken a trip to Houston in the weeks leading up to signing day, but they weren’t seen as a realistic threat. But, low and behold, signing day rolled around and Notre Dame was left hung out to dry once again.

The “A Whole Lot of Something over Nothing” All-Stars- Aaron Lynch, Eddie Vanderdoes and Davonte Neal

I’m cheating slightly over the addition of Lynch, since he wasn’t a signing day announcement. But, he was an early enrollee and his decision as to which school he was going to attend came down to the wire, as he was technically enrolled at both Florida State and Notre Dame at one point. He had committed to Notre Dame early on in the process and held all the way until December of 2010 before flipping to FSU. However, Notre Dame’s coaches stayed after him and eventually pulled him back towards Notre Dame. His recruitment was something of a circus; his mother was being tracked on Twitter, fans were monitoring the student directories of both schools, false rumors, dogs and cats living together, mass hysteria. Ultimately, of course, he ended up with Notre Dame, nearly beheaded Kirk Cousins, and promptly transferred. Thanks for coming.

Vanderdoes changed conventional thinking from “I won’t believe it till they sign the letter of intent” to “I won’t believe it till he plays a game.” Vanderdoes was the biggest signing day coup since you-know-who, picking Notre Dame late on NSD over Alabama and UCLA. He was the defensive tackle/nose guard that was prime to pair with Louis Nix and Stephon Tuitt in 2013 on the defensive line and pick up where the 2012 defensive front seven left off. What started off in December as “Hey, there’s this guy Vanderdoes who might be showing interest” to “Hey, Vanderdoes is going to actually take a visit”, then “It’s between us and Bama!”, to finally “He’s ours!”. Oh, what a lot of excitement for a guy who never took part in one practice for Notre Dame, as he somewhat suspiciously announced following spring ball that he needed to be closer to home, yet still 450 miles away, and transferred to UCLA. So now we live in an age where even signed recruits aren’t really a done deal, which is nice.

Nary has there been a road windier to signing a player on NSD than that taken by five star receiver Davonte Neal, who on the day was a no show at his former elementary school where he was to announce his college destination. The reason given was “a very serious family situation” that he had to attend to, although most of the speculation revolved around Neal not being ready to make his choice between his hometown Arizona Wildcats and Notre Dame. Eventually, Neal settled on the Irish, to the delight of Irish coaches and fans everywhere. After a year of some of the best fair catches in recent memory, Neal ultimately left Notre Dame for Tucson and the Wildcats.

Every couple years or so, there will be players who are committed go a little quiet, and fans start to wonder “Hey, have we checked in on that guy lately? Are we sure he’s solid with us?” Such was the case with Stephon Tuitt in 2011 and Tarean Folston in 2013.

Tuitt was the rare five star defensive end to commit to Notre Dame early in the 2011 recruiting cycle out of Georgia, and things were cruising along as Notre Dame also had five star Aaron Lynch in the fold and was making a major run at Ishaq Williams, a five star from Brooklyn. Right around December, there were rumblings of Tuitt wanting to take a visit to Georgia Tech. Well, those rumblings were correct as not only did Tuitt visit the Yellow Jackets, he also decommitted from Notre Dame and pledged t0 Tech. Before signing day he flipped again, but no one felt secure until his form was faxed in on NSD.

Folston followed much the same path, without the decommitment, but there were rampant rumors that Auburn was making a run at him on NSD, so much so that fans and analysts were monitoring his activities and if memory serves his letter of intent was one of the last to arrive, much to the relief of the staff and fans alike.

Of all the things Charlie Weis gave us during his time at Notre Dame–the Navy alma mater, schematic advantage, the Shark, 9-3 isn’t good enough, snot bubbles–Manti Te’o was the best. Say what you want about old Chaz Weis, but the work that he put in to lure Te’o from the tropical state of Hawaii to the frigid winters of Notre Dame was nothing short of remarkable. This man would fly to Hawaii to see Te’o play a basketball game, and then would turn around and fly home. In case you were wondering, South Bend to Hawaii, not a short flight, or flights. Even given all of that work, it was tough to imagine that Te’o would end up with the Irish, and the word on him leading up to NSD was that he was either a lock to UCLA or a lock to USC. The reason so many people felt like he was headed to their respective schools was because, well, Manti said he was, as Rick Neuheisel explained in 2013.

On NSD, everyone was confident, which meant no one was confident.  We were all glued to the TV when Manti was to make his announcement on ESPN. Was this going to be another Lorenzo Booker? Would Notre Dame finally catch a break? No and yes.

Will Notre Dame’s fortune be as good in 2016 as it was in 2009? Will it be Caleb Kelly and Demetris Robertson or even Ben Davis that change the face of Notre Dame football? No matter what the outcome is, National Signing Day 2016 will be one for the history books and likely something someone will be writing about in the years to come.