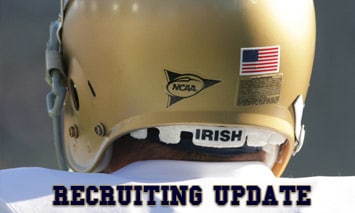 The windfalls of this past weekend’s junior day continue to roll in for Notre Dame after New Jersey athlete Rashad Kinlaw became the fifth commitment since Saturday to join the class of 2013 for the Irish.

Kinlaw, a 6’2″, 185 lb corner from Galloway, New Jersey, joined a quartet of Hunter Bivin, Colin McGovern, Mike McGlinchey, and Malik Zaire in committing to Notre Dame out of this weekend’s junior day.  Unlike the other four commitments the Irish picked up though, Kinlaw projects on the defensive side of the ball at corner on the college level.

Kinlaw’s offer list isn’t as impressive as some of the other commitments from the weekend, but a broken leg suffered playing quarterback in week 5 this past fall has hurt his recruiting profile.  That hasn’t stopped his high school coach, Dennis Scuderi,  from talking up prized pupil according to Irish Illustrated.

Whether or not those offers end up coming Kinlaw’s way remains to be seen, but what’s important now is that Kinlaw gives Notre Dame its first commitment at corner – a major position of need after the defections Notre Dame suffered at the position in last year’s class.  The first of what will hopefully be three commitments at the position this year.  At least that’s the plan and that’s what the staff told Kinlaw while he was on campus this weekend according to Irish Sports Daily.

“I was thinking about doing it when I was up there this weekend,” Kinlaw said. “They were telling me, ‘If you want to come here, you might as well say you commit instead of waiting too long and waiting until the three spots are filled.’ So I figured, I might as well do it since I want to come and there are only three spots.”

While Kinlaw spent the 2011 season at quarterback before suffering his injury, he will get a look on the defensive side of the ball this season and is already cleared for full contact.   The highlight reel below only shows Kinlaw at quarterback, but one thing that jumps out is his speed and athleticism.  The versatile athlete is certainly not lacking in either department.

What is also key to point out is Kinlaw fits the profile that the Irish coaching staff is looking for at corner – tall, athletic, and fast.