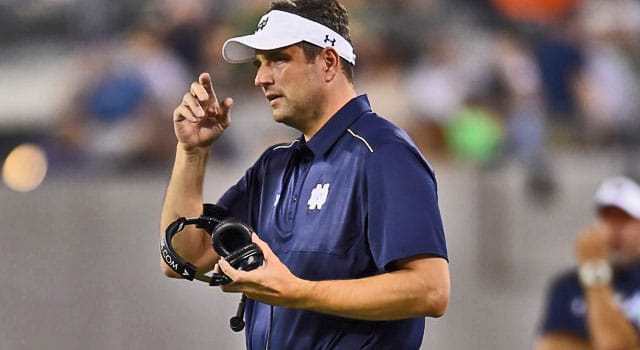 The new Notre Dame coaching staff that was officially announced on Monday featured more turnover than we are used to seeing in a single off-season during the Brian Kelly Era.  That much upheaval forced Brian Kelly to make some changes in the geographic assignments of the staff – especially considering Notre Dame lost its primary recruiter in both Florida and Texas.

Tony Alford was Notre Dame’s ace recruiter in Florida for the entire tenure of Brian Kelly and the last year of the Charlie Weis  era and was vital in landing running backs Tarean Folston, Greg Bryant, and Dexter Williams over the last few years in addition to Tevon Coney, Corey Holmes, Mike Heuerman, and Michael Deeb.  Replacing that kind of success won’t be easy, but that responsibility will fall primarily to new running backs coach and Florida native Autry Denson.

Denson, the all-time leading rusher in Notre Dame history, was announced as the new running backs coach yesterday and will be tasked with the tall order of recruiting the Sunshine State.  “I think Autry Denson will have Florida,” Brian Kelly said on Monday. “He’ll be assisted in there with some other coaches. But he’ll have a strong area in South Florida.”

Notre Dame also lost it’s top recruiter in Texas as well with Kerry Cooks joining Bob Stoops’ staff at Oklahoma.   While this past recruiting cycle wasn’t as kind to the Irish in the Lone Star State, Cooks was responsible for some of the best recruiting out of Texas in years for Notre Dame recently with players like Torii Hunter, Corey Robinson, Durham Smythe, Nick Watkins, Grant Blankenship, Kolin Hill, and Cole Luke.   Those duties will now fall to new offensive coordinator Mike Sanford.

“I think Mike Sanford is going to have a large part of Texas,” said Kelly.  “He’s had some great success in Texas before.” Texas isn’t all Sanford will be tasked with though.  Kelly said on Monday that Sanford will also be given California meaning he’ll have two of the most talent rich states under his responsibility.

That is a lot of responsibility for one position coach – especially one tasked with coordinating the Irish offense – but Kelly feels like Sanford is up for the task.  “He’ll do a great job recruiting for us as well,” said Kelly of his new offensive coordinator.  “He’s got a great background as a former recruiting coordinator at Stanford. He’ll hit the ground running as it relates to recruiting not only the quarterback position but all positions across the country.”

Sanford won’t be totally alone in handling California and Texas.  New defensive backs coach Todd Lyght will be helping Sanford in both states.  “Todd is going to be in those geographical areas as well,” Kelly Said.  “We’re kind of matching them up in those same areas. So Texas, Florida. He’ll have responsibilities in those areas, as well.”

Mike Denbrock previously handled California, but Kelly said yesterday that he would be given some more spread-out responsibilities this year.  “Mike will be more involved this year in some of the geographical areas, as well,” Kelly said.

Aside from the the changes in regions with all of the staff shakeup, Notre Dame will also have a new Recruiting Coordinator after losing Alford.  Mike Elston who previously served as Brian Kelly’s recruiting coordinator at Cincinnati will assume that same role six years later for Notre Dame.  Kelly feels Elston is more than up to the task.

“Mike brings an attention to detail, a vision for what it takes to communicate to today’s kids out there that are being recruited, whether it be through the social media aspects or simply finding the right buttons to push when it comes to recruiting,” said Kelly.

Notre Dame will also lose some of the recruiting services of Bob Elliot who is moving into a special assistant role after coaching the outside linebackers and safeties over the last three years.  With the move to a more administrative role, Elliot won’t be permitted to be on the road recruiting anymore, but that doesn’t mean his recruiting responsibilities stop all together.

Elliot, along with other new support staff members such as Graduate Assistant Maurice Crum Jr and Director of Player Development Ron Powlus will still be assisting the Irish staff on the recruiting front.  “They can be on campus, they can make calls. They’re going to make sure that on a day to day basis that the process is moving seamlessly,” said Kelly.

Notre Dame lost a lot of firepower on the recruiting front, but with the staff that Notre Dame has put together, they have the resources in place to be just as, if not more successful, on the recruiting trail with the new members that have joined the staff even if newcomers Todd Lyght and Autry Denson are green when it comes to recruiting.